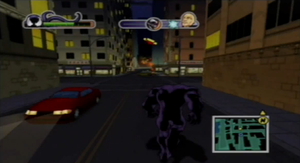 Stay close to Electro, but not too close.

The chapter will start off with an imprisoned Eddie Brock. Eddie will eventually escape as Venom. The goal of this chapter is to follow Electro. You'll have to feed on people from time to time, so don't stray too far from the streets. Still, when Electro begins to fly, keep on the buildings so you don't lose him. A meter at the top of the screen will show your progress toward Electro. Get too far and you'll have to start the chapter over. You also can't get too close - Electro may, on occasion, create a large dome of electricity to surround him. Get caught on it and you'll need more health than you're losing already. Try to feed when you're closer to Electro so you don't lose him. Then, after you're done feeding, you can try and catch up to him. Simply follow Electro until he stops, and then the next chapter, Mine will immediately begin.