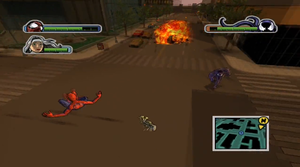 Pay attention to your health as well as Sable's.

After a cutscene, Silver Sable begins to attack Peter once again, only to be stopped by Venom. Peter is overwhelmed by his spider senses and doesn't notice the battle between Sable and Venom. Venom is quick to knock Sable out and then runs away with her. Peter notices just in time and changes into Spider-Man. Chase after Venom, who is getting away with Sable, by web zipping and web swinging after the arrow. The path is simple most of the time, but it can be a bit tough staying on track. Get to the point where Venom stops to begin the battle. Now it's Spider-Man versus Venom for second time. The first thing to do is to switch to your adrenaline rush special move (Nintendo DS version). Venom will try and grab you with his long tentacle to feed on you whenever you run toward him, so get ready to dodge when you see that spider sense. It is recommended to run at him and dodge because it sets you up for instant combos. He will eventually feed on you (probably more then once) but don't worry, just punch and kick him until you win. Then sit back and watch the cinematic.