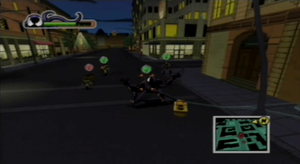 Another simple chapter while playing as Venom, this one starts with a cutscene of Eddie Brock's transformation into the beast. Silver Sable and two of the Wild Pack, unbeknownst to Venom, are watching his transformation. Now becoming an immediate target, the Wild Pack sets out to attack Venom. This is where the chapter's action comes into play. As Venom, all you'll have to do here is, simply, fight through the Wild Pack. Members will be there to attack you around every corner, so tentacle attacks are best. Also, if you have one person isolated, you can try to throw them to knock them out. Don't forget to feed on the occasional attacker to boost your health. After you've beaten up every member thrown at you, the chapter will end with a general cutscene and the point of view will switch back to Spider-Man.