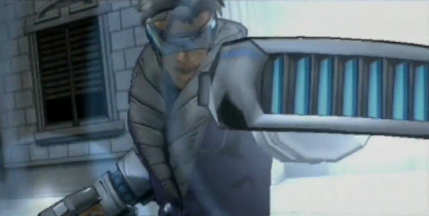 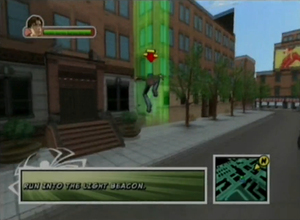 For the first part of this chapter, all you have to do is follow the tips and get to the beacons.

You'll start the chapter off by having to walk to a beacon of light. This should be easy enough, as the beacon of light is right in front of you. Then, the arrow will direct you to a second beacon of light in an alleyway. After you reach the second one, a box will show up telling you how to wall crawl: press

F while running into a wall. Follow the arrow up the building and walk into the beacon of light for the next tip. To jump, press

Space. The longer you hold the button, the higher the jump will be. Get to the next beacon of light and then you'll be told how to double jump: press the same button twice. Keep following the arrow to the beacons until the next cutscene. After the cutscene, Peter will be given web abilities.

The first tip will show you how to Web Zip. Press

at the same time to use Web Zip. After the next to beacons of light, you'll be told how to web swing. Press and hold

to web swing, then release to let go. Get to the next beacon of light and you'll be given more tips. Press

Q to boost and 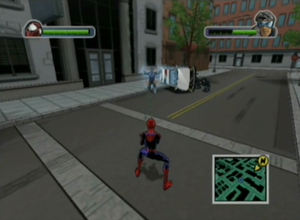 Take down Shocker to get to the next part of the chapter.

This can actually be a challenge first play through the game, and is comparable to the fight with Mysterio in Spider-Man 2. The fight takes place on the Queensboro Bridge. You start out right in front of a civilian that you must carry to the ambulance to the right. It is recommended to rescue the guy before you take on the thug with the gun because him and Shocker could take him down in three shots. After you've rescued the guy, it is recommended to use the Adrenaline Rush special move. Try and give Shocker a beating for a minute or so without passing to the left half of the bridge. This is so that you don't activate the AI of the thug around the other hostage. 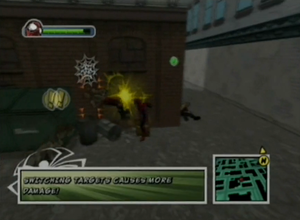 When Shocker is going to blast you (indicated by your spider sense), dodge while running at him. Beat him down with punch and kick combos until you have your special attack. When you get the attack, activate it and let loose with punches and kicks. When you're satisfied with Shockers' first beating, web him up and move on for the hostage on the left. Save him before Shocker breaks free. Now just continue beating him down. Hit him with a nice 4 hit combo and then flee before he does the shield attack, then repeat. Throw some dodging in to the mix and you will take him down easily.

In this variation Shocker has blown around some cars and has left a bus full of people dangling on the edge of the bridge. This one is a bit easier than the Shocker Beat down but uses the same strategy for fighting Shocker. This time you have got to web him up every so often to get a chance to pull the bus back up on the bridge. Do this every time you see the warning sign of the bus slipping. after a minute or two you should have Shocker defeated.