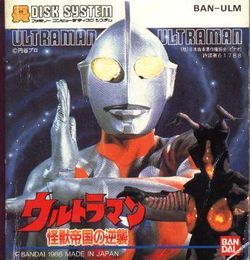 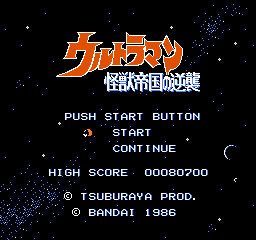 Ultraman: Kaijū Teikoku no Gyakushū, loosely translated as "Ultraman: Counterattack of the Monster Empire" is a side scrolling platformer developed for the Family Computer Disk System and published by Bandai at the start of 1987. This game is the first Famicom game dealing with Ultraman. Ultraman 2 was a sequel developed as a simulation game, and Ultraman Club: Chikyuu Dakkan Sakusen was developed as an RPG utilizing the "chibi" or super-deformed style of artwork for the characters.

The player controls Hayate, a member of the Science Special Search Party, which protects the earth from invasions of large hostile aliens. He must run across each stage, defeating enemies with his ray gun. He must also collect energy orbs to fill a meter on the screen. When it is full, he can transform himself into the powerful Ultraman. Energy balls can appear under a variety of circumstance, such as beating an enemy or shooting points in space. Just like in the show, you can only be Ultraman for 3 minutes, and you can chop or kick the boss monsters. When only one minute remains, Ultraman will gain access to two secret powers, the Specium Ray, and the Cutting Halo. Once the boss monster is defeated, the stage is cleared.

If all 11 stages are cleared and the player continues, the game will change the character to Dan Moroboshi who can transform into Ultra Seven. Although Ultra Seven's capabilities are the same as Ultraman's, the defensive power of the enemies will be higher. There are two versions of this game, one which was distributed on disk, and one which was distributed through disk writing stations (made available on March 26, 1987) and they feature slightly different background music tunes.

Throughout the majority of the game, you will be in control of Hayate (pictured to the left). As Hayate, you are fast and nimble, but not very strong. In fact, it will take only one hit from any enemy to kill Hayate, so you must avoid contact with them at all costs. Hayate's only means of offense is his ray gun, which he can fire to the left or right. The ray gun can be upgraded to a more powerful weapon if he fires his weapon in the right locations in certain stages to reveal a hidden gun icon. As Hayate progresses through each stage, he must be sure to collect as many energy orbs as he can find, in order fill up the meter that allows him to transform into Ultraman. Once the meter is full, you can press

at any time to transform into Ultraman. Doing so will reset the remaining time to 3 minutes, regardless of how much time was remaining. Ultraman can sustain more than one hit, but each hit will deduct a bar from the meter which Hayate had to fill up. If Ultraman's meter is depleted, he will lose one life and the stage will start over. Ultraman has access to a variety of attacks. Ultraman can kick at any time by pressing up. The attack the Ultraman will use when you press

is determined by the highlighted power tile at the top of the screen. Ordinarily, Ultraman will only have access to two attacks, and the final two only become available when the remaining time on the timer is down to one minute. See below for an explanation of the attacks.