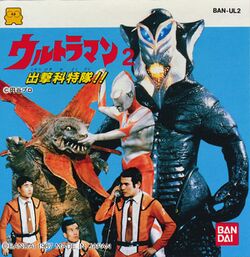 Ultraman 2: Shutsugeki Katoku Tai!! (ウルトラマン2 出撃科特隊！！, Ultraman 2: Shutsugeki Katoku Tai!!? loosely translated as Ultraman 2: Sortie Department Group) is an action game developed by Bandai for the Famicom Disk System and published at the end of 1987. As the title implies, it revolves around the Ultraman series that was popular in Japan. However, rather than making Ultraman the focus of this game, it is the defense support team that goes into action whenever Japan is attacked by a giant monster which gets the majority of the game time.

The game takes place in modern Japan, with a bird's eye view presentation of much of Japan's metropolis. Players must send a team out to search for, and obtain, a cube which permits the defense team to damage monsters when they appear. Once the cube is found, monsters begin to appear and attack the buildings of Japan. The team must deploy vehicles to help aid in the destruction of these monsters until they have all been defeated. If a monster destroys a critical building, the game is instantly over.

There is not a lot of variety in the game, and it can be beaten relatively quickly. The player does not even need to transform into Ultraman to beat the game. Load times are also quite high. This game was only released in Japan, and has never been translated from Japanese.