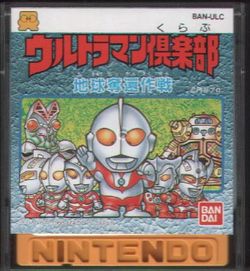 Unlike the two prior games, which were more action-oriented, this gmae is a turn-based RPG similar to Final Fantasy. Players could also select each scenario from the title screen, choosing to play them in whichever order they wished. This type of freeform non-linear RPG model would appear later in Dragon Quest IV, although it had been common practice in Capcom's Mega Man series long before Ultraman Club's release.