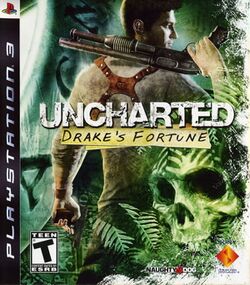 Finding Francis Drake's coffin, Nathan Drake, accompanied by his documentarian Elena Fisher and long-time friend Sully, acquires the ancient explorer's journal, which hints at the treasure of El Dorado. Drake and Sully immediately engage in the hunt for the treasure, with Elena joining along the way. However, another treasure hunter, Gabriel Roman, is also on El Dorado's trail. Drake and friends will have to overcome Roman's forces and the dreadful secrets left in El Dorado's wake to unveil the mystery surrounding the legendary treasure.