Welcome to StrategyWiki. If you have any questions, just contact a sysop through their talk page or post on the staff lounge, and they'd be happy to help. If you need help editing, check the editing article. If you have a question about the content on this wiki, you can check out our staff lounge page. If you want to ask questions or hang out in IRC, we're usually around. On the other hand, if you have ideas for StrategyWiki, bring them up in community issues. Feel free to delete this message from your talk page if you like, or keep it for reference. -- DrBob (Talk) 05:41, 24 October 2006 (CDT)

They are in that category so people searching for the game on an alternate name (yes, even in an alternate language) will be able to find the game they are looking for. For example, if you played Mother 2 a lot, but were stuck on just one part, you'd search for "Mother 2", not "EarthBound", because the version you have is entitled "Mother 2". --http://media.strategywiki.org/images/1/16/Skizzerz_Scissors.pngSafety Skizzerz Talk · Contribs · Spel Chek™ · VFG · RTFM 15:24, 3 October 2007 (CDT)

Hi New User. I just wanted to let you know that we're actually in the process of dismantling the Move Lists directory, and placing the information where it belongs, housed under each game series (see Street Fighter II and Street Fighter Alpha. So don't be upset, but I'm going to have to delete your contributions. Please feel free to help contribute to the project though. See those two Street Fighter guides' Table of Contents to get an understanding of how they should be arranged. Procyon (Talk) 14:51, 7 October 2007 (CDT)

Hi New User
As Procyon said we are not using the Move-List Pages anymore, so I'm currently trying to get all my pages to go with the new style. You can take a look at Street Fighter II to see how it is supposed to look. I honestly don't know if it's better if the moves are on the main page or not, but I think it's importent that we try to have the same "look & feel" on all the Fighting Game pages. --Bmuig 15:03, 7 October 2007 (CDT)(Talk)

You bring up an excellent point. Although I'm not sure if the link that you provided is the most visible place for the information to go, that's where I will put our intended plan. Procyon (Talk) 15:05, 7 October 2007 (CDT)

Well this kind of discussion should go somewhere...StrategyWiki:Move lists project maybe? Anyway, I took a look at Street Fighter II and it is my understanding that the characters' move lists are sub-pages of the main article, correct? So it is my opinion that the master list should also be a sub-page, with an obvious link on the main page. The reason is, move lists are about as close to a walkthrough as most fighting games get, and if the move list is on a sub-page it will be more like the rest of the game guides on strategywiki. What does everyone else think? New User 15:14, 7 October 2007 (CDT)

OK, have a look at StrategyWiki talk:Move lists project whenever you have a chance. Thanks! Procyon (Talk) 15:25, 7 October 2007 (CDT)

Hi New User. I really appreciate your help with the move list content. Thanks very much for that. However, just to clear one point up: The individual move lists for the characters from Samurai Shodown go in Samurai Shodown/Charlotte, Samurai Shodown/Gen-an, etc. Eventually, we will edit Samurai Shodown/Characters/Charlotte and transclude the moves from SS, SS2, SS3, etc., to that page, and add pictures and a biography of Charlotte. If you don't feel like fixing the ones you've done so far, don't worry, I'll get around to it. Thanks! Procyon (Talk) 16:49, 7 October 2007 (CDT)

That all makes sense, I was just using Street Fighter II as a model, and it links them all to Street Fighter II/Characters in the same places I have been linking to. That is to say, the individual move lists as linked form the SF2 page and from the SF2 table of contents do not link to Street Fighter II/Ryu, Street Fighter II/Blanka etc. I'll just keep doing what I'm doing for now, and when the character pages are eventually created the character bio and portrait can just be added to the already existing move list. By the way, what does transclude mean? I can't find it in the dictionary ;) New User 17:01, 7 October 2007 (CDT)

Cool, are there images available too? If that's the case I'll see what you can come up with before I continue. Right now all I have to work with is images from MAME and a copy of the instruction manual for the 3DO version of the game. The manual only has one or two sentences describing each character, which makes it hard to paraphrase. Oh yeah and I noticed that some of the moves for Nakoruru are different in the 3DO manual. New User 19:40, 7 October 2007 (CDT)

Whenever there are more than 10 images, or you can safely assume there will soon be a large number of them, please create a game specific category such as Category:Drift City images and include it on all the images you upload (for example Category:Samurai Shodown images). Thanks in advance. --Notmyhandle (talk • contribs) 21:55, 8 October 2007 (CDT)

The guide is a good start, but it could still definitely use improvement, particularly when it comes to paragraphing. As it stands, it's one giant block of text. Try breaking it up into multiple smaller blocks instead of one big one. If you really want to make the guide fly, look at the featured guide and emulate it. Steal code if you want from them - in fact, stealing code is strongly encouraged. If you have further issues, contact the admins on mIRC.

The image thing is strongly recommended, but it's not really mandatory - one of the major things with SW is its use of images - something that other sites, such as GameFAQs - generally lack. It's recommended therefore you take advantage of them. --Arrow Windwhistler 10:58, 12 January 2008 (CST)

Hi New User (that feels so odd… cuz you're not new. Anyway…) When it comes to maps, remember that the idea is to give the player an idea of what's around and where he or she needs to go, not to recreate the entire level in a 1:1 pixel ratio. For Mighty Bomb Jack, and all of Super Mario Bros, and I think even Zelda 3, all of the maps are reduced by 50%, but it's also been interpolated, so even though the size is reduced, you can still see a good degree of the map details. The point is you can still tell exactly what's where, and where you need to go and how to get there, you know? The player will see the full detail on their screen, so they don't need to see it in the guide. To illustrate my point, here is your first map shrunk in half using cubic interpolation: 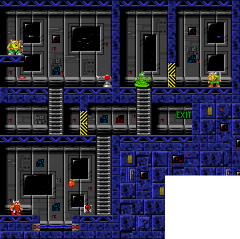 Sure, you can't make out the Vikings faces, but you can clearly tell them apart, and the Exit sign is also clearly visible. Personally, I think this does a great job of showing what you need. Then you can add highlight points directly on to the map and explain them in greater detail in your text. I guess my point is, you only need to give people the right idea. They'll see it for what it really is when they play the game, so don't worry about capturing every bit of detail. Let me know if you need anymore help. Procyon (Talk) 22:06, 18 January 2008 (CST)

Yeah I know how to fix it. The way this template has been laid out to work requires that the parameter/variable name be exactly the way it was created (i.e. the things you see in the infobox now such as {{{level name}}} want you to pass data to the variable with the following syntax: "level name=WHATEVER"). If you look at the page as it was when it was broken, you'll notice incorrect usage ("level_name=WHATEVER"). Underscores make a difference here, so look for those next time. I've fixed this page for you. Also, look at the current page to see how a template should look when used (the pipes, "|", go at the start of the line). Hope that helps, if you need anything else just ask or throw me links of pages that need work. --Notmyhandle (talk • contribs) 16:58, 26 July 2008 (CDT)

Hi NU :) Yeah, to a large degree it's from playing, but I also have a (incredibly) limited ability to read certain Japanese pages, so I'm usually able to hunt down a lot of great data that only Japanese pages tend to have. I like to think that I'm doing a service not only by providing the strategy, but also by making a lot of that information available in English for the first time, as a way of providing something unique to SW and make it stand apart from other guide sites. I was indeed going to include that information about the Fairy spell. I'm trying to include one sidebar per page, and that information will be quite helpful to include on the Island Palace page, which is currently lacking a sidebar. As always, thank you so much for coming along and proofing my writing. I'm often times embarrassed by the mistakes I seem to make, but for some reason, I write more content when I think less about how well I'm writing. When I concentrate on not making mistakes, I write about five times slower because I worry. I just want you to know how much I appreciate your effort. Procyon (Talk) 02:51, 11 October 2008 (UTC)

There you are. I was wondering where you were ;) It's good to know you're still around, your help is appreciated as much now as always. Thank you so much. Procyon 13:42, 27 October 2009 (UTC)

When uploading images, please make sure to categorise them using the correct image categories and the guide-specific category, i.e. [[Category:Super Castlevania IV images]]. The image policy is viewable here, and contains all the information you'll need to categorise future uploads. --najzereT 19:32, 28 October 2009 (UTC)