Valkyrie no Bouken/How to play

With all of the citizens of Marvel Land scared, or under Zouna's control, the Valkyrie will receive no help from anyone in the form of hints or advice. You and the Valkyrie are completely on your own when it comes to discovering all that Marvel Land has to offer. You will need to use your wits to devise a plan that will help you defeat Zouna once and for all, and many of the tasks that lay before the Valkyrie are not obvious. Some can only be surmised by exploration and experimentation.

Every time the Valkyrie defeats a monster, she earns experience points towards the next level, and usually a small amount of money. Money is scarce in Marvel Land, but the truth is, you rarely need it to buy any equipment. All of the items in the game can be obtained for free... if you know where to look. In addition to equiping various weapons and armor, the Valkyrie gains access to seven different spells. When she learns each one is dependent on her intellect, which increases with each new level of experience. The first and most valuable of these spells is probably the healing spell. 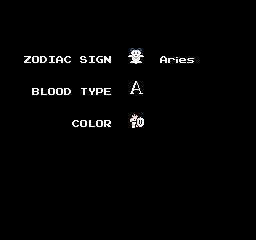 When you start a brand new game, you will be presented with a series of selections that you must choose from before the action of the game begins. The zodiac sign and the blood type that you choose for your Valkyrie will have a direct impact on your starting strength and level progression throughout the game. Your color selection, on the other hand, is purely for your customization and has no effect on the game. While you may be tempted to enter your own zodiac and blood type (if you happen to know it), it is better to understand how these selections impact the Valkyrie so you can make an informed decision. It is important to realize that level progression is not set in stone, and that a bit random luck is involved. Even players who make the same selections every game will find that their Valkyries' growth differs slightly from one to the next.

How to play
Walkthrough
Appendices
Retrieved from "https://strategywiki.org/w/index.php?title=Valkyrie_no_Bouken/How_to_play&oldid=980857"
Hidden category: