From StrategyWiki, the video game walkthrough and strategy guide wiki
< Valkyrie no Densetsu
Jump to navigation Jump to search 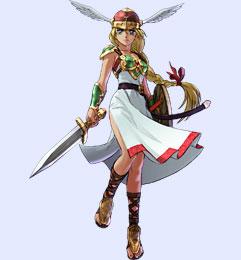 Namco's Japan-only 1989 platform/shooter arcade game, Valkyrie no Densetsu (which is the sequel to the old 1986 Famicom game entitled Valkyrie no Bōken: Toki no Kagi Densetsu) is divided into eight stages; Sand Land, Honō no Daichi, Magma no Dōkutsu, Kogane no Jōseki, Sai Hate no Mura, Kōri no Dōkutsu, Kita no Daichi and Chikyū Naibu. One player can play alone as the sword-wielding Valkyrie (who, as mentioned on the main page, is not an actual Valkyrie from Norse mythology - just a warrior maiden from the heavens who happens to be named after them) and a second player can join in at any time as her trident-wielding sidekick Kurino Sandra (who, as also mentioned on the main page, is an anthropomorphic green lizard-man, despite his second name, but it is not obvious). The amount of life-hearts the pair shall possess at the start of the game depends on what the arcade owner has set the "LIFE" setting on the options menu to: 2, 3, 4 or 5; therefore, if you are using MAME to play this game (which you almost certainly will be unless you are a native inhabitant of the "Land of the Rising Sun") you may wish to set the "LIFE" setting to 5 in order to increase your chances of in-game survival.

Most enemies will leave gold coins behind when killed, which come in two different sizes: small (which are worth 5 in gold), and large (which are worth 20 in gold); some other enemies will also leave money bags (which are worth 50 in gold) behind when killed and coloured chests containing randomly-generated amounts of gold can be found in preset locations throughout the game. The maximum amount of gold that Valkyrie and Sandra can possess starts at 1000, for the first stage and increases by 2000 for every subsequent stage - which means that the maximum amount of gold they can possess by the end of the game is 15000. However, the sole purpose of collecting gold is to exchange it for special items with the travelling salesman Zoul (who appears in preset locations throughout the game, and is one of Valkyrie and Sandra's sort-of partners); when one player walks up to him and enters his realm, the other will automatically be drawn in as well, and they'll each be asked to choose one of the three items shown on the rug in front of them. As mentioned on the Getting Started page you must push the joystick into the "north-west" position to select the first item, the "north" position to select the second item and the "north-east" position to select the third item, then press your Firing Button to confirm your choice - or just push the joystick into the "south" position to exit Zoul's realm if you were automatically drawn into it because the other player walked up to him and you cannot afford to pay him.

The other enemies will leave what are known as "magic bubbles" behind when killed (which also come in two different sizes): small (which are worth half a circle on your magic meter), and large (which are worth a full circle on your magic meter); three "magic bubble trees" (which will leave five small bubbles behind when destroyed) are present on that first stage, and the Nazonazo Phantom will give you four large bubbles if you answer his multiple-choice question correctly on the fourth stage. The sole purpose of collecting these bubbles is to maintain your ability to cast the "magical spells", which were taught to you by the elderly sorcerer Babasama (who, like Zoul, appears in preset locations throughout this game and is a second of Valkyrie and Sandra's sort-of partners) - and his protégées utilize the spells by holding down their Firing Buttons. The "Magic Bubble Trees" also look like this: