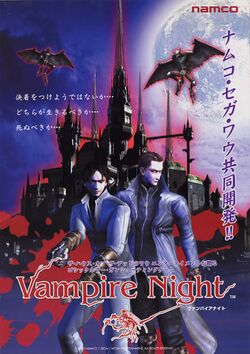 Vampire Night is a first-person shooter arcade game, developed by Sega and WOW Entertainment for Namco and released in 2000; it runs on Namco System 246 hardware, and the players must use two eight-slug shotguns to kill vampires over six stages (Snow, Stone, Fire, Darkness, Water, and Moon), while rescuing innocents before they become full vampires. When either player is firing at a vampire, the vampire's life meter is displayed on the screen, so it is advisable to aim for their heads (their weak points shall also be indicated by targets) - and to rescue the innocents the players must shoot the sacorma attached to their bodies, as if they actually fire at the innocents themselves, they shall immediately become vampires. If the players manage to rescue a certain amount of innocents, special events can occur, and the innocents may reveal useful information; furthermore, the players can also take secret routes within each stage by causing special events to occur and killing specific enemies. As in most of Namco's older first-person shooters, there are objects in each stage that the players can fire at to destroy them (some of which will leave energy and point bonuses behind), but unlike in most other games featuring bosses, this game's bosses can appear at any time during the stages - so if one of them happens to appear at the start of (or in the middle of) a stage, the players shall still have to hold out until the end of that stage after killing the boss to proceed to the next one.