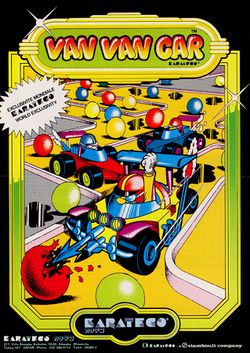 Van-Van Car is an arcade game that was released by Sanritsu, in 1983, and licensed to Karateco for EU manufacture and distribution; as with Dream Shopper and Dr. Micro, it runs on Namco's Pac-Man hardware (a Zilog Z80, running at 3.072 MHz), but with two Texas Instruments SN-76496s running at 1.78975 MHz for sound. The flyer may give the impression that it uses an isometric perspective but it uses the same overhead view as the first six Pac-Man titles - and, the player must use a 4-directional joystick to take control of a yellow racer car (the eponymous "Van-Van Car"), which is on a mission to burst balloons with its front-mounted spike while watching out for the three "killer" cars (which are red, green, and blue, so the last one looks somewhat like an evil version of the car from Namco's Rally-X).

Each normal balloon burst will be worth 200 points, regardless of colour; also, if you press that "Jump Button", Van-Van Car will jump into the air, and every time it jumps over one of the killer cars, you will receive 100 points. However, if Van-Van Car should land on one of the killer cars, it will (ironically) be killed just as if it had crashed into one - and when there are only eight balloons left, a "bonus" balloon will appear in that maze. Once you burst it, you will receive 500 points for every regular balloon left in that maze (so the maximum amount of points you can receive for doing so is 4000); also, if you burst an "energy" (yellow) balloon, Van-Van Car will gain a missile. Once you press the Jump Button while in possession of it, Van-Van Car will fire it - and it will destroy any balloons (and killer cars) it ploughs through, for 200 and 1000 points respectively. It is also not advisable to burst another energy balloon until you have fired the missile as Van-Van Car can only hold one at a time, and the killer cars cannot pass over the balloons and will be forced to go around them; the killer cars will also not chase directly after Van-Van Car immediately and will only do so after a preset number of balloons have been burst or a preset amount of time has passed. Finally, Van-Van Car will start spinning around in a clockwise direction at twice its normal speed when it passes over an oil slick - and even though it loses its jump power, it will quickly be able to get away from the killer cars, especially when they are close behind it.