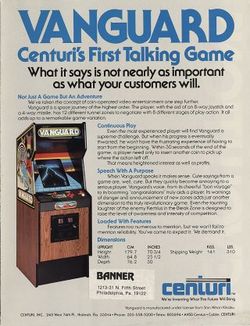 Vanguard was an arcade game of many firsts. It was developed in 1981 by SNK, and it was SNK's first color game. It also included a synthesized voice. It was one of the first horizontally scrolling shooters, and the first that allowed the player to fire in four directions independently of the ship's motion. Finally, it's the first game to incorporate the concept of a boss, a final opponent at the end of the game that is more difficult to beat than usual.

In Vanguard, players pilot a ship that must cruise through the cave of the Gond. The cave is divided up into various sections. Each section has different features to it, as well as an orientation. It might be horizontal, or vertical, or even diagonal. Players can fire any one of the four guns mounted on the ship, each of which fire in a different direction. Players might also encounter energy power-ups which make them invincible briefly. The ultimate goal is to reach the end of each cave and destroy the Gond once and for all.

Vanguard was an exciting and visually impressive game, but it was lost among the competition that came out around the same time. That did not stop Atari from buying the license to distribute the game on home systems. However, they only opted to bring it to their own Atari 2600 and Atari 5200 systems. A hacked 5200 version was also released on the Atari 8-bit home computers. Vanguard was an ambitious title for the 2600, and given the system's limitations, the conversion comes off admirably. 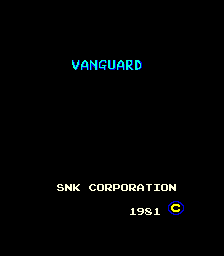 The Gond has been terrorizing nearby space colonies with its periodic raids of destruction. The time has come to put an end to his reign of terror. You have been selected to pilot an advanced fighter ship with high offensive capabilities. You must enter the cave inside the asteroid where the Gond makes his home, and safely fly through every zone; the Mountain Zone, Rainbow Zone, Styx Zone, Stripe Zone, Bleak Zone, and the City of Mystery where the Gond is rumored to reside. Take the Gond out, and succeed in your mission. Fail, and the colonies will be doomed.