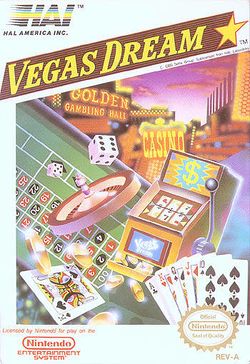 The game begins with graphics showing the player arriving at Las Vegas by airplane. Featuring a back-drop of old downtown Las Vegas (with signs featuring thinly veiled references to the Pioneer Club ("Pionee Club" in the game), Binion's Horseshoe and Glitter Gulch), players then choose which to play of the two versions of the game: "Vegas Dream" (storyline version) or "One Spot" (strictly gaming, no storyline).

Players then start with a bankrole of $700 at the fictional HAL Palace Hotel, to spend on four games: keno, blackjack, roulette or slot machines. Between rounds of play at the normal casino games, there are randomly occurring social interactions with various characters, such as business people, other patrons, or casino employees (in the "Vegas Dream" version of the game only). These interactions (and the players' responses to them) have different possible results: sometimes the unidentified man is a pickpocket; other times he's just down on his luck and will reward the player for his/her kindness down the road. The results of interactions are reported on a local Las Vegas news station; music with a cheery tone plays for positive happenings, such as the player receiving cash, with more sombre music playing for thefts, injuries, etc.

Vegas Dream also allows the player to date and marry as many members of the opposite sex as you care to; men married a woman named Ms. Sophie while women married a gentleman named Mr. James. However, the marriage(s) don't affect the player's status (apart from the increased cash flow, or perchance the person they married is crooked, a loss of funds from theft).

There is a password save feature built into the game. However, the passwords are twenty-six characters long and consist of letters, numbers and symbols making them difficult to record correctly. The Japanese version, with gameplay identical to the North American version, uses slightly stronger language in its script and even mentions cigarettes. The text within the Japanese version is also entirely in English.

It is possible to win the game by earning over ten million dollars, at which point the player is seen reclining by a pool with his household staff (assuming the player has moved into a mansion and has hired servants), and then taking a limousine to a show with their partner.

Should the opposite happen - and the player(s) lose all his/her money - the staff at the HAL Palace give the player one final pull on a slot machine in a last-ditch effort to win some more money. If the player wins, they get to resume their gaming; if not, the player is bid good bye, and a screen appears showing persons heading towards a plane, ready to depart Las Vegas, ending the game.