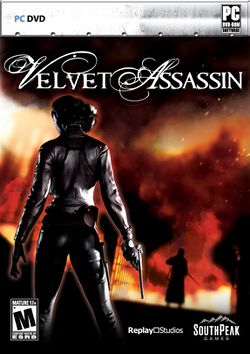 Velvet Assassin (previous, working title: Sabotage) is a stealth action video game for Xbox 360 and Microsoft Windows, released in North America on April 28, 2009. The game is inspired by a real life World War II secret agent/saboteur Violette Szabo. Players take on the role of Violette Summer as she goes behind enemy lines to thwart the German war machine. The game shares many similarities with Tom Clancy's Splinter Cell, No One Lives Forever, and the Hitman series.

Players take control of Violette Summer, a beautiful but deadly spy deep behind enemy lines with no support or official backing from the British Government. Gameplay employs techniques similar to Ubisoft's Splinter Cell range of games. When the game begins, you see yourself from above, lying in a hospital bed after a mission gone terribly wrong. There are morphine syringes scattered across your bed, and the influx of drugs in your system creates a series of dreams that let you recount your past missions.

The game employs a special lifeline if detected called "Morphine Mode". If triggered, a cutscene will play out where the hospitalized Violette convulses and is administered a dose of morphine by a military nurse. Once returning to the game, the game world will temporarily freeze, giving the player the opportunity to execute any remaining enemies. Players will have limited use of the Morphine lifeline. Furthermore as the game progresses, players will be afforded the opportunity to select the type of upgrades they would like - depending on gameplay style. As a stealth-based game, lighting plays an important role.