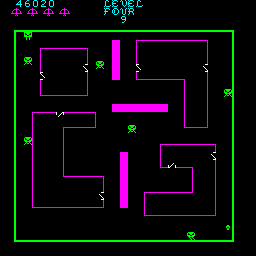 This is the first floor plan that you will encounter every time you play. It serves as the room layout for levels one, four, and seven. The rooms are set up in such a way that you can traverse the rooms in a clockwise direction fairly easily. You start closest to the bottom left room. The barriers in the room are more helpful than they appear since the hallmonsters aren't that great at maneuvering around them, so the they slow the hallmonsters down quite a bit. 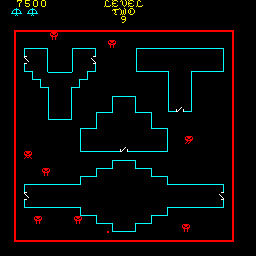 This next floor plan features two new challenges. For one thing, the floor plan isn't laid out quite as conveniently as the one before, so there's no clear cut order to tackle the rooms in. You begin at the bottom, so naturally, you will want to work your way from the bottom to the top. The second challenge is that many of the rooms in this floor alter themselves in some way once you're inside. Either the state of the enemies change when you collect the treasure, or you must wait some period of time before you can collect the treasure. This is the floor plan for levels two, five, and eight. 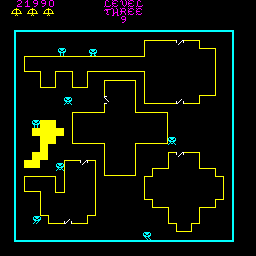 The last floor plan naturally contains the most difficult rooms. It serves as the floor plan for levels three, and six, and repeats forever as level nine and beyond. At level nine, many of the hallmonsters are much faster than you, so you can't waste any time moving from one room to the next, or they will surely catch you. With an odd arrangement of rooms that take up most of the floor space, there isn't a lot of room for error when traveling from one room to the next. Taking the rooms in the order presented here is one of the most optimum routes.