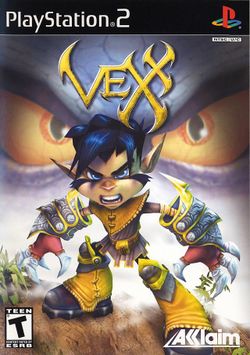 Vexx is a video game developed by Acclaim Studios Austin for the PlayStation 2, Xbox and GameCube consoles released in 2003. The game is a 3D platformer game, starring a character of the same name. The objective consists of collecting magical hearts and unlocking more worlds to play, defeating enemies and jumping across platforms. Vexx is armed only with the legendary Astani war talons, which give him the power to defeat his enemies, as well as fly and swim under water.

The introduction tells briefly of a planet called Astara, which was inadvertently destroyed by its own inhabitants, who "opened a door better left closed." The planet was, in fact, destroyed by the Shadowraiths, after the Astani created the Rift system, which could open portals to other worlds. When the portal was opened, the Shadowraiths came through it and attacked Astara, and then drained all of the energy out of the Rift system.

Seven hundred years later, Astara is literally in pieces, and all that is left are large chunks of land floating in an asteroid field, yet the individual pieces of the planet are still inhabitable. One village, called Overwood, is eventually discovered by the Shadowraith, Dark Yabu, and its inhabitants are enslaved. One villager named Vexx, who is captured along with his grandfather, Vargas, attacks Yabu in a fit of rage, and is almost killed when Yabu retaliates. But Vargas saves Vexx, and is killed by Yabu instead. Vexx must embark on a journey to defeat Yabu and free his world from the Shadowraith.