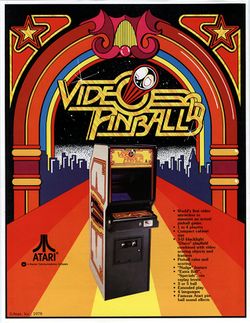 Video Pinball is a pinball arcade game, which was released by Atari (in 1979); it utilizes a Motorola M6502 (running at 756 KHz), and the player must use a plunger to launch the ball at the start of the game (and every time it drops off the bottom of the screen), two buttons to operate the left and right flippers, and pushing down upon the control panel, to "bump" the virtual table from underneath. The game had a backdrop (which was mounted under that cabinet's marquee, reflected off a mirror, and therefore displayed behind the game's playfield) - but if you are using MAME to play this game, you will not see the backdrop (and you will not see some of the targets unless they are lit as a result). A sequel which was originally to be called Super Man, but was later renamed to Orion XIV and again to Solar War, was also due to be released later in the year; however, this was eventually cancelled.