From StrategyWiki, the video game walkthrough and strategy guide wiki
(Redirected from Vs. 10-Yard Fight)
Jump to navigation Jump to search 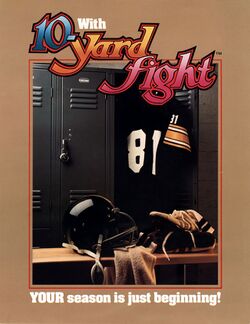 10-Yard Fight is an American football game which was developed by Irem and published by Nintendo for the NES. The title was ported to the NES on October 18, 1985.

The great American sport of football is acted out on the screen with 9 players per side. The player can choose to play against the computer controlled AI or in a head to head match-up. When playing against the computer you start out against a high school team, and as you advance to the "Super Bowl" team you must defeat the college, pro, and playoff teams. Each game takes place over two (accelerated real-time) 30-minute halves. 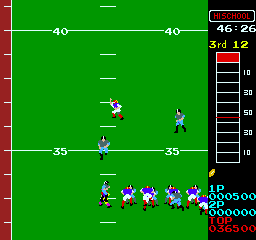 The game starts out with the player receiving a kickoff. The player controls one character with 8 blockers surrounding him during the kick off. Once tackled, the offensive player is assigned a random formation which automatically lines up on the field. The player must press A to hike the ball upon which he will be controlling the quarterback. While waiting for the player to hike the ball a receiver will be in motion through the formation, giving the player the choice of where the receiver will start his route. Upon hiking the ball the player can choose to use the quarterback to run for a gain, throw a lateral pass to either of two running backs (one on each side of the quarterback) by pressing

, or throw a forward pass to the receiver by pressing

. The player will continue playing until he is unsuccessful in gaining a first down or until he scores. When a player scores a touchdown he also gets to kick a PAT or try and run it in for an extra point.

On the kickoff the player controls the kicker and can attempt to tackle the other player. And again, when regular play resumes, the formation is randomly lined up on the field, but this time the player can choose from two characters to play as by either pressing

. When the play starts the player moves toward the character with the ball and can perform a diving tackle by pressing either

To snap the ball, press D-pad

simultaneously. This will put you into kicking mode and a Blue Arrow will appear on the screen. Use your D-pad to move the Blue Arrow and aim your kick, then press

to launch the kick.