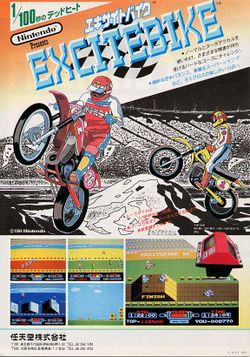 Vs. Excitebike (VS エキサイトバイク, Vs. Excitebike?) is a motorcross racing simulation game developed by Nintendo. It was released in the arcade shortly after the original Excitebike was released for the Famicom, partially in an attempt to create a demand for the home version in the United States. Though similar to the home console version, it features several key differences. The Design mode is removed in favor of a sixth and seventh additional track beyond the five found in the home addition. Rather than choosing between racing alone or with competition, players alternate between both play styles for each track. A bonus stage is presented after the third track, in which the player must attempt to launch their bike over a series of trucks.

Among all of Nintendo's Vs. arcade titles, Excitebike was one of the most common, appearing more frequently than even Vs. Super Mario Bros. This is largely due to the fact that when arcade owners were given the choice between an easy to understand motorcross racing game or a strange adventure about a plumber who eats mushrooms to grow in size, they went with the concept that made the most sense to them.

The Vs. version of Excitebike was later released on the Famicom Disk System with some improved features, including a simultaneous two player mode that the original game lacked, and an improved track save system (the tracks were saved to the writable portion of the disk). The music is completely different; none of the songs from the original game are present in this version, and a background theme is played during gameplay. Despite being the better of the two versions available for the Famicom, the disk version was never re-released in any format, while the original version has been released on several platforms, and as a Virtual Console title. 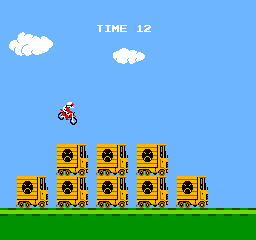 For more information and tips on how to play, please see the Excitebike page.