From StrategyWiki, the video game walkthrough and strategy guide wiki
(Redirected from Vs. Raid on Bungeling Bay)
Jump to navigation Jump to search 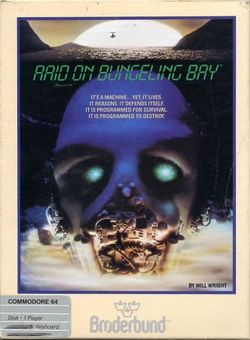 Before Will Wright had us simulating real life with SimCity and The Sims, Raid on Bungeling Bay was the first published video game that he designed. Apart from offering a 2D overhead view of terrain which was a bit more complex than in other games, Raid on Bungeling Bay was basically a simple war zone shoot-em-up. The player controlled a helicopter that launches from an aircraft carrier to bomb six factories scattered across islands on a small planetoid occupied by the Bungeling Empire (the usual villains in Brøderbund games), while fending off escalating counterattacks by gun turrets, fighter jets, guided missiles, and a battleship. Your only friend is the carrier that you begin each level on, and can return to repair and pick up bombs as long as you manage to protect it from being destroyed. There was also a hidden island for the player to reload on. The main goal in each level is to destroy a factory, which requires a steadily increasing amount of bombs to destroy.

It was published by Brøderbund for the Commodore 64 in 1984 with the British version published by Ariolasoft. The game was converted in Japan to the Famicom and MSX computers in 1985. Nintendo adapted the Famicom version for play in the arcade using their Vs. arcade system, and titled it Vs. Raid on Bungeling Bay.