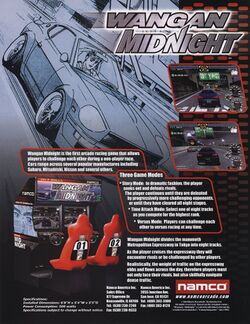 Wangan Midnight is a racing arcade game which was released by Namco in 2001; it runs on Namco System 246 hardware, and is based on the manga comics of the same name by the then-44-year-old Michiharu Kusunoki (which had been serialised for Kodansha's Young Magazine, beginning in 1992). Sold as a story-based direct upgrade for existing cabinets of Ridge Racer V: Arcade Battle, it was the first racing game which allowed two players to challenge each other during a one-player race - and it also features several real-life cars produced by Japanese manufacturers including (but not limited to) Subaru, Mitsubishi and Nissan. Set on Tokyo's Metropolitan Expressway, the game has three modes; Story Mode (in which the player has to find and beat CPU-controlled opponents by racing them, and the player shall continue until he or she gets beaten in a race or clears all eight stages), Time Attack Mode (in which the player must select one of the eight tracks as he or she tries to complete a full lap of it in the fastest time), and Versus Mode (in which two players can challenge each other to race at any time). The first and third modes also have a "Life Gauge Battle System" in which both cars have gauges whose values shall decrease when they trail too far behind their opponents, as well as when they crash into walls and other cars - and once the value of either car's gauge is reduced to 0, they'll lose the race (however, if the timer happens to run out, the car that was in the lead shall be declared the winner regardless of their gauge's value). In 2002, the game was converted for play on the Sony PlayStation 2; five years after that in 2007, it was also converted for play on the Sony PlayStation 3, as well as on the handheld Sony PlayStation Portable under the name Wangan Midnight Portable.