This scenario is actually quite easy, at least on normal level. The main reason is that the Orcs never attack you seriously. In addition, you get hordes and hordes of gold, so if you want to abandon finesse, build up an overwhelming strike force, and sweep aside all opposition, feel free to do so. However, this walkthrough uses a deliberate approach.

You will start with 4 Gargoyles, 2 Ghouls cutting wood, 2 Crypt Fiends, 2 Meat Wagons, 1 Shade, 1 Frost Wyrm, 5 Acolytes, Arthas, and Kel'Thuzad. This puts you at 39 food. This walkthrough recommends that you stay at the zero-upkeep limit as long as you can, and as it turns out, that will be until the end of the scenario. Accordingly, you have room for only one Acolyte more until you lose units, and because you really don't need more than 5, he will be converted to a Shade.

One of the Blademasters.

As soon as you start this mission, upgrade all your Ziggurats to Spirit Towers, especially the two at the eastern entrance to your base as they will be attacked not long after you start the mission (but long enough for you to upgrade them). Don't omit to upgrade your Necropolis as well! Organize your troops right away. That means that you assign control groups to all your non-worker units. Send your artillery to where your Frost Wyrm came from and park them. There is a good chance that that area is safe; you don't want to have to worry about them until you need them. Send your first Shade somewhere. Straight up the middle (i.e. north) seems to be a good choice.

Once you've beaten the first attack of the Orcs, you will get your optional quest: kill the Orc Heroes! When you've killed the first Hero (a Blademaster), he will drop a Manual of Health, which adds 50 health to the Hero that uses it. Don't be in a rush to use it yet.

Repair the damage and add some defenses where the first attack came from. Park your second Shade to keep watch on the east entrance to your base, and send your first Shade sweeping around to the SW. Before too long, you should locate an Orc base in the SW corner of the map. Amazingly enough, it looks very weak - just a couple of Towers and a few troops, none very powerful. You should also have located two gangs of dragons. Ignore the dragons for now; they are big, and you taste good with ketchup, and you have more important things to do.

Take a chance and send your entire army (all 11 of them) to crush the SW Orc base (dark blue). Lead with the artillery, and have the rest of your troops standing by to defend the artillery. You will have to deal with a substantial logistical problem getting your troops across the bridge, even though half of them fly. There are no bad surprises, at least on normal difficulty. You should be able to crush the SW Orc base handily, even though a small Orc attack comes in from the north while you are engaged in the corner. As soon as resistance is eliminated, send your front-line troops back to your base and let your artillery finish off the remaining buildings.

The Orc base to the SE (brown) is next on the hit list. It is rather stronger than the first one, so you should build some more Towers of your own on the approach. Otherwise, just attack it like you did the first one. It will fall fairly easily, and now you will have a vast supply of gold and only three enemies. You shouldn't really have lost any units yet. 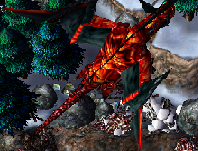 One of the Red Dragons.

At this point, you can expect to be attacked from only two directions, and both should be heavily fortified already. It isn't necessary, but it seems reasonable to start wiping out some of the creep groups now. You will now start to see that your force has a significant weakness: you have very limited anti-air capacity. Only your Lich and your air units have regular anti-air capacity, and air units generally don't perform very well in that role because they die too quickly. Arthas does have his Death Coil, and your Crypt Fiends do help ... for now. This means that your primary anti-air unit will be your Spirit Towers, so if you haven't already done so, learn how to use Towers offensively.

Your next target should be the Orc base to the east (light blue). Here you can expect to lose some units. Don't just replace your units; rather produce whatever units you think would be most effective. For example, one Meat Wagon is about as good as two, and there is a creep Priest that is worth possessing. However, there are very few units on this map that are worth possessing, except for those that you can't possess, so don't get a lot of Banshees. One wrinkle is that these guys have air transport, so they can and will take you by surprise and maybe do some damage.

Crush the Orc base to the north (orange) next, and just when it looks like it is safe to go out at night, you run into a problem. The final Orc base (red) in the NE corner of the map has Dragons! Big Dragons! Lots of them! Now your Crypt Fiends are useless, so you will need to invest in lots of Gargoyles and offensive Towers. Nevertheless, the difficulties are more psychological than substantive, and you will win shortly.

Go to top
← The Fall of Silvermoon | Blackrock & Roll, Too | The Siege of Dalaran →