Somewhere in the Arathi Highlands, Thrall, the young war-chief of the Orcish Horde, wakes from his troubling dream. 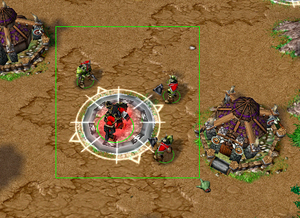 This is a tutorial mission, meant to teach how to control characters and the basics of the Warcraft III interface. You simply need to follow the beacons (and the path) to the end. This is as easy as it gets, so if this is your first time playing Warcraft, take the opportunity to get familiar with the controls.

As you start out, heading north, you will enter a small Orc base and you will acquire three Grunts. Add them to your party and continue along the path, north of the base. 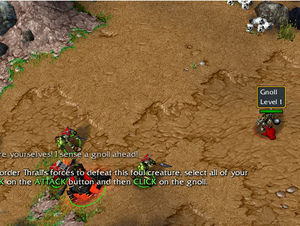 Target this gnoll and defeat it to continue.

As the path turns east, you will encounter a single Gnoll. You'll easily overpower it with your party. Continue along to the south; you reach a Gnoll encampment, with two Gnolls and a Gnoll Poacher. Attack this party with Thrall in the lead to let him take the brunt of the attacks (he has more hit points and heals faster). It's most efficient to focus your entire party's attacks on a single enemy until he/she/it dies, then move the focus to another enemy, etc., until the entire group of enemies is gone. You can destroy the Gnoll Huts if you like.

You should level up at this point, so immediately go into the spell upgrade section. You only have one choice -- Chain Lightning. Add this spell, as it will come in handy shortly. 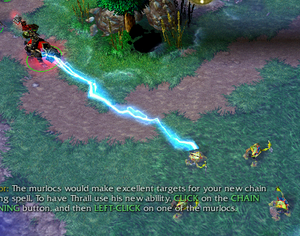 Keep moving south, and you will enter a shallow-water area that has a Murloc Tiderunner encampment. Again, gang up on single Murlocs and take them out one at a time. Using Chain Lightning as your first attack will do significant damage, especially to the first Murloc targeted. Target one Murloc for Chain Lightning, then tell your party to attack that one. It should go down extremely quickly, which means fewer enemies attacking your party right off the bat.

One of the Murlocs will drop a Potion of Mana; right-click on it to pick it up.

The water area turn around to the north. Follow it, and just at a turn to the east will be two more Murloc Tiderunners. Again, Chain Lightning will make quick work of these enemies.

The path continues out of the water and winds its way south. A little further along, as it bears to the east, there will be a forest path that heads south-west, then south-east. Take this short path, and Thrall can pick up a free Potion of Healing at the dead end. 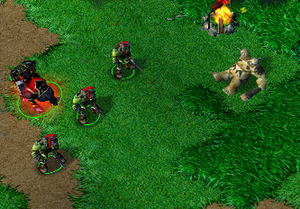 Bypass this sleeping ogre. It's not worth fighting.

Keep moving along the main path, and you'll soon come to a sleeping Ogre Warrior. It is not necessary to fight this beast. This Ogre doesn't drop any treasure, nor will you gain any more experience for defeating him (as you've already leveled up for the round). But you can easily defeat him, despite the gentle warning that Thrall's voice-over provides, particularly with Chain Lightning. It will, however, only take more hit points away from your Grunts, and there are more beasties to fight, some of which will drop treasure. You can easily bypass this fight and let the Ogre sleep. 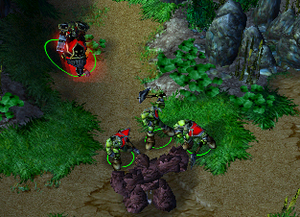 It's easy to miss these golems if you don't look. Try not to bypass these.

Just as the path turns north again, there is another forest trail that continues east. In this area are three Stone Golems, all spread out so you only have to fight one at a time. One of them has a Ring of Protection +1, which is certainly worth the battle. The Golems are arranged in a triangle, with the first one you get to at the northern point. You have to fight this one to get by to the other two, so fight him you must. Golems are pretty tough, but you can send Thrall in first so that the Golem attacks him (remember, he has more Hit Points and heals faster, plus he now has a Potion of Healing), and then bring the Grunts in to bring him down quicker. Unfortunately, you cannot use Chain Lightning on a Golem as they are immune to magic. 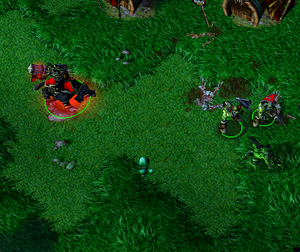 These trolls yield some rewards when you take them out.

Once the first Golem is destroyed, head to the Golem at the south-east point of the triangle; this one has the Ring of Protection +1. You can use the same tactic -- attack first with Thrall, then bring in the Grunts to make it go quick. The third Golem, at the south-west point, doesn't have any treasure, so there is no advantage in killing him, other than the sense of completion you might get. A useful tactic is to again focus your attacks on a single enemy, but to start with the most powerful enemy, in this case, the Berserker. The reasoning is that the sooner you can take out the enemy that does the most damage, the better chance of survival your party has. Remember, a unit with a single hit point does the same amount of damage as the same unit with full hit points.

The last Troll you kill will drop a Manual of Health, which can be used to permanently gain 50 hit points for Thrall. The structures do not hide any treasures.

The only thing left to do now is head north to the last beacon, which upon arrival will complete the level. 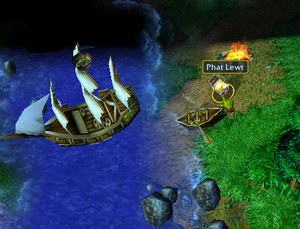