Warcraft III: Reign of Chaos/Cult of the Damned

The next day, on the outskirts of Andorhal.

In order to get into Andorhal, you'll need to run through an Undead base. You can either rush the base, or follow the more traditional route of building up your army and defending against the Undead attacks in the meantime. On easy and normal difficulties, you start with enough of a party to take out the Undead base in the immediate beginning of the game, before it has had a chance to upgrade itself and start producing units. Details will be focused on the rushing approach.

Note that the following strategy works best on easy and normal difficulties. Immediately grab all of your units. Put Arthas, Jaina, the Priest, and the three Footmen in one group, and the Mortar Team in another. Send them north-west to the Undead base. You can use Arthas to draw fire while the rest of your party gangs up on any units. The base should start with only one Necromancer, who will be able to raise Skeleton Warriors from the Graveyard. It should be relatively easy to take out the first Ziggurats (the Undead equivalent of a Farm) and Graveyard, along with the units. Watch out for the Halls of the Dead (the Keep equivalent) and the Spirit Tower (upgraded Ziggurat) further north that act as defensive structures. Your first goal, after leveling the southern part of the base, is to take out the Temple of the Damned (which produces Necromancers). It will be in range of the Halls of the Dead, so use your Mortar Team and if you like, Jaina and the Priest to attack from a safe distance. Keep any other unit available to defend against Necromancers produced before the Temple falls.

The next target should be the Crypt, which produces Ghouls. This one will be a little trickier in terms of avoiding fire from the defensive structures. Stay to the east of the base area and try to attack with the Mortar Team from as far east as possible. You should be able to attack from a safe distance, but when a Ghoul is produced and comes your way, your other units may find themselves within range of the Halls of the Dead. Keep a tight leash on them and pull them back as soon as the Ghoul is killed. You can use Hold Position to keep them from running in to attack the Halls of the Dead.

Once the unit-producing buildings are out of the way, you won't have to worry about any Undead units attacking your party or your base. At this point, use your Mortar Teams to take out the Halls of the Dead and the Spirit Tower from a safe distance, and after that let your party loose to bring the entire base to the ground.

While all of that is going on, you can be upgrading your base. You'll at least want a Blacksmith and probably a Workshop, which requires a Keep upgrade. With the Blacksmith research all of the upgrades, and if you plan to use Priests, build an Arcane Sanctum and upgrade to Priest Adept Training.

On hard difficulty, the Undead base immediately upgrades all Ziggurats into Spirit Towers, and starts with a second Crypt and four Ghouls. Additionally, everything but the second Crypt and the Temple of the Damned will be rebuilt on hard difficulty, while nothing gets rebuilt on easy and normal difficulties. This will be typical base-building game play. Focus on getting a strong defense at the west end of your base, as the Undead will attack from there. The east end will probably be left alone.

Assemble a decent party; you'll need some Mortar Teams to take out the defensive structures, some Priests to heal your party as you go, and a fair number of Footmen, supported by Riflemen. You can also try using Arthas with Divine Shield to hit-and-run the Undead base. Target the closest Crypt and the Temple of the Damned, since everything else will be rebuilt.

At some point, your Gold Mine will collapse, and you'll be tipped to go find the additional Gold Mine and use it. The way is dangerous, so send your party in first. However, it's worth noting that with the rushing of the Undead base, you'll have just as much if not more gold available to you from their old Gold Mine as the other one east of your base. In fact, establishing a secondary base there might prove useful as a closer starting point for new units.

Either way, it's worth exploring the woods east of your base and some useful treasures can be found.

Head east out of your base, and enter the stream. Head south, and there are two Murloc Huntsmen. 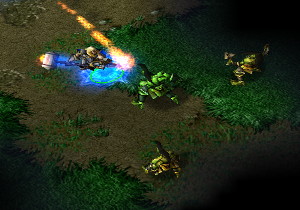 Forest Trolls with Claws of Attack +6.

Head west then north, and a Gnoll Poacher hiding behind a tree will taunt you, then run north. Do not follow him without your whole party, as he's leading you back to an ambush at his camp where two more Gnoll Poachers and a Gnoll Assassin are waiting. Again, it's easier on you to divide and conquer. The one Gnoll Poacher will eventually come back, where you can engage him again. When he's dead, head north to the Gnoll camp and take them out, using the usual method of focusing on the most powerful enemy first, and using Arthas to draw fire and/or heal units that get seriously wounded. The Gnoll Hut hides a Potion of Healing.

If you go a little further west from the Gnoll camp you'll find a Goblin Merchant that sells Scrolls of Protection, Potions of Mana and Wands of Negation.

Somewhere near the Goblin Merchant is another Forest Troll Berserker and two Forest Trolls, who is patrolling. Wait for the Berserker to come to you, as again, dividing them up makes it easier on you.

Head west into the stream and take on three Murloc Nightcrawlers. If it's night, save them for later, since they won't attack because they're asleep, and you can't see them to attack when they're standing still at night. One will drop a Potion of Mana.

Make sure you're well healed, because to the north-east of the Gnoll camp are two Mud Golems and two Rock Golems. Use Jaina to attack the first Mud Golem you see, and retreat back to the party. The Golem will chase you, as will the other Mud Golem, but this will keep you from also drawing the attention of the other two (much more powerful) Golems. You can try a similar tactic on the remaining Golems, but both will probably attack you if you attack just one. The Rock Golems are tough. They're immune to magic, have a lot of hit points, and pack a strong punch. As always, you're best off focusing your fire. Make sure everyone is healed up and see if you can have Arthas take the heat up front, having Divine Shield ready for when his hit points fall too low (you decide when that is). Also use Jaina's Water Elemental for a free extra unit, and even Blizzard if you've got it, but be careful not to cause damage to your own men. One of the Rock Golems drops a Ring of Protection +2.

South of here is the other Gold Mine, but as noted earlier, it may be just as well to use the Gold Mine the Undead were using.

In the stretch between your base and the Undead base, there are two branches to the trail that head south-west. The one closest to your base has three Enforcers, which can take their toll on your party. One of them carries a Potion of Mana. This battle may be worth it for the experience points but probably not much else.

Refresh your troops if needed, and bolster them as well. At the minimum, give yourself two Mortar Teams, two Priests, and five Footmen. Consider an extra Priest and some supporting Riflemen. Also get every available upgrade at the Blacksmith, the Arcane Sanctum, and Barracks, if not done so already. The good news is that at this point you face a finite number of Undead enemies, as there are no unit-producing structures available to them anymore.

When ready, head back to the old Undead base, and from there go north-east into Andorhal. You'll meet Kel'Thuzad. After the cut-scene, you are charged with finding him. But first, take out the two Ghouls that he left for you.

Head east and a little south, and there will be a cage. Attack it and "Timmy" will come out, who is actually some sort of friendly Ghoul. Kill Timmy and he'll drop a Ring of Superiority. Head north and there will be two more Ghouls.

Continue north out of town, and follow the path to the east. Two Ghouls guard the way. The shallow water to the west contain a Goblin Merchant that sells Potions of Healing, Scrolls of Healing and Scrolls of Protection.

At the end of the path is a mini base with five Abominations, seven on hard difficulty, a Slaughterhouse and a lone Ghoul. Your safest bet is to divide and conquer again. Use Mortar Teams to attack from afar, and lure the Abominations to your party, hopefully only one or two at a time. The Slaughterhouse is inactive.

You can optionally send in Water Elemental after Water Elemental to attack the Abominations, and while this will save your party any damage, it will take a long time, besides which there is little to do after this point.

Once the Abominations (and single Ghoul) are cleared, you get to go after Kel'Thuzad. He should be no match for you... even Arthas alone can easily take him out. Killing him finishes the mission.

Rush the Undead base, using your Mortar Team to take out the unit-producing buildings while defending it with your other units.

While it's not necessary to use the Gold Mine to the east of your base (even if you do need the gold, you can use the Undead's old Mine), there are a few good treasures to be had by exploring the area: a Claws of Attack +6 held by the Forest Troll Berserker in the South-East, and a Ring of Protection +2 held by one of the Rock Golems.

Make your way through Andorhal. With a decent party you won't meet much resistance worth noting. Be sure to attack the cage hanging in the middle of the town, and then to kill the Ghoul that comes out of it, as it will drop a Ring of Superiority.

Head North out of town and follow the path to Kel'Thuzad. At the end are five Abominations, and it's best to draw them out one or two at a time, rather than taking them all one at once. Kel'Thuzad will be last, but he won't put up much of a fight compared to the Abominations.

In the branch that's closer to the Undead base, not the branch with the Enforcers, is the only villager still alive. She gets killed by two Ghouls as you approach.