Warcraft III: Reign of Chaos/Daughters of the Moon

Three hours later, somewhere in the foothills of Mount Hyjal…

This is a very easy scenario. You get lots of everything: troops, items, and other benefits. While several other Heroes could do well in this situation, this is designed to be a covert operation, and the Priestess excels at that. At the same time, it is a very complicated scenario, as long as you play it as a covert op.

Should you choose, you could just make a run for it and win the scenario that way, especially if you have prescience and clairvoyance. However, abandoning your troops while the leader runs is no way to build a first-rate army, and it is no way to build an empire. On the other hand, you could eradicate all the Undead from the map and cleanse the land. Eradicate the Humans and Orcs as well; at this point, they are all invaders.

A Priestess of the Moon is a first-rate stealth Hero. In this scenario, you can use her stealth capacity in a major way. In order to do this, you will need to use the keyboard shortcut to Shadowmeld: i.

Move - i - look (repeat many times). Explore the NW map corner, using Owls as appropriate. Pick up the Claws of Attack +3 and the Slippers of Agility +3 in the extreme corner. Dump the Scroll of Protection. (Tyrande is now fully loaded.)

Move south. Halfway down the left map edge, you find a Scroll of Healing in a box.

There is a neutral Furbolg in a cage. It runs away to the east. Depending on how quick on the draw you are, follow it quickly or slowly. If you are fast enough, you will be see it fighting a Doom Guard; otherwise, you will just find its corpse. Now, it may not be obvious, but Tyrande and that Furbolg will kill a Doom Guard. Kill that Doom Guard! Keep in mind that Tyrande holds a Potion of Greater Healing and some Healing Wards.

Keep scouting. In the SW map corner, you see a group of Humans, with some Ghouls beyond them.

As you keep moving along the path, you find a Druid Pouch (+1 Intelligence) in a box. Take it for now. Cross the bridge to the SW map corner. There you find 5 Archers fighting one Human Footman. Break the barricade and rush in to help your troops. You get a Potion of Healing from a box. Dump the Druid Pouch. The first night is now half over.

Now take your little army and go back to kill the nearest Doom Guard. Tyrande is now level 3! She can't increase any more this scenario. Kill a third Doom Guard to create a huge safe area, and then a fourth one because you're on a roll. Collect all unused items near the bridge, and kill the remaining 2 Doom Guards in this area during the first day.

Move back to the SW map corner and finish scouting the west part of the map while you wait for the second night. The next obstacle is 6 Human Footmen, and beyond them are 6 Ghouls. There is a Goblin Merchant NE of the Humans. A bit further on is a large Undead force just SW of an Orc base. Then there is a Waygate leading to a Fountain of Health.

When you approach the Humans, they start fighting the Ghouls. This fight leads approximately to mutual annihilation. You should probably kill any remaining units in this area. Pick up the Ring of Superiority (+1 Strength, Agility, & Intelligence) from a box; dump a Potion of Healing. The Merchant wares are standard and of little interest.

When you approach the Undead, they attack the Orcs. The Orcs should win this fight. You do not need to kill the remaining Orcs, but you should run in and grab the Mantle of Intelligence +3 (dump the Healing Wards).

Move all unused items and your troops to the Fountain of Health, where you recruit 3 Huntresses. You now have a force to be reckoned with.

Exit through the gate to the north and turn right. Kill the Doom Guard and the Shade. Get the Scroll of Healing from the box.

Move along the path. Kill 3 Gargoyles. Ignore the Gloves of Haste.

Further along is a group of Humans, who fight a Doom Guard and should kill it. Join in this fight or not as you please, but take the Tome of Strength. There is also a Scroll of Protection in a box.

When you reach the second gate and the second Fountain of Health, you are joined by 4 Huntresses and 2 Archers and are now at 35 food! Scout the NE map corner from this location. You may have noticed by now that hidden units keep popping up. Your Owls won't see them. Only the presence of an actual unit will cause them to appear. 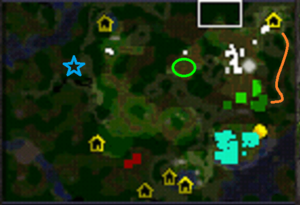 The map. The blue star is where Tyrande started. The green oval is where an Undead outpost used to be. The white rectangle is where a Hydralisk was found. The secret path is marked in orange.

Blow up the nearest Undead Spirit Tower. A bit to the NE, you gain 3 Ballistas. Your Owl will have seen a (Starcraft) Hydralisk behind some trees to the NE. You can recruit it by blowing up some trees.

When you reach the Fountain of Health in the NE corner, you gain 3 more Ballistas and 4 Archers and now have a size-70 army! At this point, it is a simple matter to clear out the Undead outpost NW of the main Undead base. Here you gain a Manual of Health (take it) and a Mana Stone (leave it).

You now have several options. You could eliminate all Undead presence in this area, which is not too hard, although it will take some time, and then waltz into your town through the front gate. Or you could distract the Undead with your army while Tyrande runs through the front gate. Or you could locate the secret path along the east map edge, blow up the trees closing it, and sneak Tyrande along that path to finish the scenario.

Don't bother picking up scrolls and potions. You are not going to need them. The only strategy here is to escape every battle and loot the most powerful items. In fact, most treasures are not even hidden in crates, so you may find yourself completing this mission without shooting a single arrow. 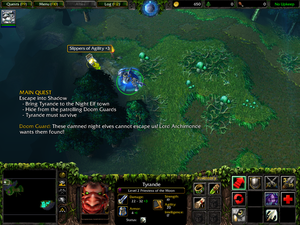 Quickly move Tyrande to the NW corner of the map. You should be near the Slippers of Agility +3 by the end of a small cutscene with three Doom Guards. This will let you grab both items found there without using Shadowmeld. The second item is Claws of Attack +3. If you have Circlet of Nobility from the previous mission you may ignore Slippers of Agility +3.

Travel south and release Furbolg trapped in a cage. With any luck, it will distract a Doom Guard. Crates up until this place have only consumables in them. You will come across a Druid Pouch further down the road. Safely ignore this treasure. Past the bridge, you will stumble upon a small Human encampment with some of your troops. Leave the Archers behind. Having an army will only slow you down.

In the next camp, Humans are fighting the Undead. One of the crates has a Ring of Superiority, which is a pretty good item. Don’t join the fight unless necessary, and head east to where an Orc base is being torn apart by an Undead force (or vice-versa). Quickly grab the Mantle of Intelligence +3 at the NE part of the base and jump into the Waygate. On the other side you will find a Fountain of Health and more troops.

Replenish your health if necessary. Do not take the Huntresses with you. Shades in the area behind the gate will reveal any invisible units. Without Shadowmeld you are going to take damage, though you can easily escape Doom Guards due to their low movement speed. Make sure you have empty slots in the inventory to quickly pick up items.

Directly north of the gate, Gargoyles are guarding Gloves of Haste. West of the gate, surrounded by spikes, you will find a Ring of Protection +2. All crates found within this area contain optional consumables. After the Ring is picked up, continue heading north until you face a closed gate. Night Elf troops will open it for you from the other side. 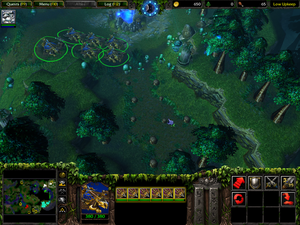 Another Fountain will restore your health. Once again, leave reinforcements behind. Travel east alone and turn south right after Undead Ziggurat. In a small area another Ziggurat and a couple of Doom Guards are guarding treasure. Use Manual of Health and loot Mana Stone. Your item inventory should be full by now. 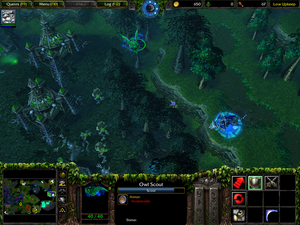 Tyrande overlooking Undead base on her way to Night Elf town

Dodge Doom Guards and get back on the main road. Continue going east past the abandoned Ballistas. Coming across an open area it will seem as if the only way to Night Elf town is now blocked by the Undead Base. It’s not true. Find a small path to the east with 3 more Ballistas and Archers gathered around the Fountain.

This is where additional troops will be useful for the first time. Use Ballistas to destroy trees directly south of the Fountain. Doing so will open up a narrow path that leads directly to the Night Elf town. Given that destruction of the Undead Base yields no treasures, the optimal way to complete this mission is to take the shortcut.