This level has two parts, one is to establish a base, which, when completed, will trigger the second quest: Find Grom. It is helpful to know that the second quest will start as soon as you accomplish the first. With that in mind, you can delay the second quest by completing everything except for the fifth Grunt, and give yourself time to get ready for the second phase.

Follow the narrator's instructions about establishing a base, setting some Peons to mine gold, training some more Peons and setting them off to build a War Mill and a Burrow (or two), and some off to gather lumber. Once the War Mill is built, and as you have resources, upgrade your weapons and armor to Steel. When you build a Barracks, however, build it down by the river, by the two Watch Towers that are already set up for you there. The second quest continues across the river, so if you need some more Grunts, it'll be helpful to have them start as close to you as possible. Once the Barracks is built, feel free to have your Peon build more Watch Towers in line with the two already there. Space is kind of tight here, and you don't want to completely block passage.

Train four Grunts, but before you train the fifth Grunt, send them and Thrall to the North. Somewhere between the main base and the river is a trail that heads north. First you'll encounter a Gnoll and a Gnoll Poacher, which will be easy to take out. The path continues to the east, and at the end you'll find three Gnolls and a Gnoll Warden. Use the tactic of sending Thrall in first to draw fire, and focus your attack on the Gnoll Warden. Once he's out of the way, the remaining Gnolls will be easy to kill. The Gnoll Warden will also drop a Scroll of Healing. This is the only treasure in this map. 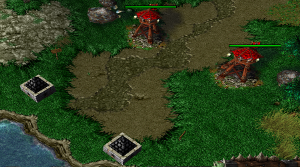 A bridge will be raised in the lower left.

Once you've done that, take your party back to the river, and position them between the Watch Towers and the river. Now, start training three more Grunts. The first one will complete the first mission, and you'll have a short cut-scene that has the Humans raising a bridge across the river and sending a Captain and four Footmen over to attack. You'll be ready for them.

The Humans will be no match for your forces. However, you will take some damage, so you may as well wait for the rest of your Grunts to train and heal a little.

Once you're ready, move across the bridge (to the south-west), and if you want, take out the two Scout Towers. The path will lead to a gate which you'll need to attack and destroy to enter the village and continue. There are two more Scout Towers here, but they are harmless; destroy them if you wish.

Head north into the village. You will soon reach two Footmen at a turn. They will be easy for your party to take out, particularly with Chain Lightning. Defeating the Footmen releases a Grunt they were holding prisoner. Add him to your party.

Follow the turn south-west, and there will be a lone Footman holding a Shaman prisoner. Kill the Footman and add the Shaman to your party.

Follow the path west, and attack the Footman here, then north of him are two Riflemen.

Keep going west, and there will be two Footmen who hold two Grunts and one Shaman prisoner.

North of this are two Knights guarding a gate. Knights will be the toughest Human enemy you've encountered so far, so be ready for battle. Do your best to keep their attacks focused on Thrall (because he has the most hit points and heals the fastest), and again, use Chain Lightning while focusing your attacks on a single Knight. You should be able to defeat them fairly easily, as you should have eight or more Grunts in your party by now.

Behind the gate are three Guard Towers, which will attack your Orcs (much like your Watch Towers attacked the Humans). Usually the best way to take out Guard Towers is with a Catapult (or Ballista or Meat Wagon, depending on your current race), as they are the only units with a range that reaches beyond a Guard Tower's range. However, you don't have Catapults, so you just need to send your Orcs in. With a large enough army, though, you'll probably only lose one or two Grunts as you take out the three Towers. Just keep them focused on a single Tower at a time. Strictly speaking, there is no reason to lose any units here; saving units is a major part of combat micromanagement, but it doesn't matter here.

Once the Towers fall, Grom is released, and the level is won.

The level's only treasure can be found by killing the Gnoll Warden in the North-East part of the map, who will drop a Scroll of Healing.

In the South-West corner of the map is an inaccessible church with a large graveyard. Use Thrall's Far Sight to find it (or use the map reveal cheat). There doesn't seem to be any way to get to it, nor does it appear to have any significance.

Go to top
← Chasing Visions | Departures | The Defense of Strahnbrad →