Warcraft III: Reign of Chaos/Key of the Three Moons

Main Quest - Gates of Silvermoon
Bring Arthas to the Gate 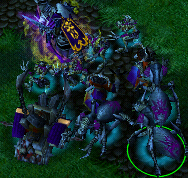 These are the units you start with.

You start out with Arthas, 4 Ghouls, 2 Necromancers, 1 Meat Wagon, and 4 Acolytes, soon joined by 3 Crypt Fiends. With no structures, you're also way past your food limit.

When you've acquired the Crypt Fiends at the beginning of the level, clear out the High Elves at the gold mine to your southeast. Establish a base there.

Priority one is building up clusters of Ziggurats - you're over your food limit - and a Graveyard to upgrade them into Spirit Towers.

Skip over the Crypt, unless you need more Ghouls. Get a Halls of the Dead for a Slaughterhouse and a Temple of the Damned, for extra Meat Wagons and to upgrade your Skeleton Warriors.

Sylvanas's base sends out complete groups of infantry across the bridge. The other major base mainly sends out Windriders to attack from your north. Assault power and size increase over time, but frequency lightens up as you crush their bases.

Leave a thick layer of Ziggurats to your north and west, backed up with some Crypt Fiends and Meat Wagons against Sylvanas.

When you're ready, take the Zeppelins from the Goblin Laboratory and cross the river east to the rune symbols. You should have Arthas, 4 Necromancers, 2 Meat Wagons, and whatever Ghouls and Crypt Fiends you want as backup. Keep Raise Dead on Autocast.

Take the Gold Mine; you'll need it. The Way Gate here leads to the central island. If you're not worn down, go through and cut through the Elven outpost there.

Go through the middle Way Gate on the central island.

6 Necromancers and 4 Meat Wagons are recommended; if you're all upgraded, the Skeleton Warriors make all the difference.

Keep in mind that you can ignore the Sky-Fury towers, which are anti-air only.

Sylvanas's base is through the last Way Gate on the central island. This guards the last Mooncrystal key.

Bring Arthas to the Circle of Power in the northeast, ignoring the defenses.

The Necrowagon strategy works well in the High Elf levels. You'll need a crew of Necromancers summoning Skeleton Warriors from Meat Wagons packed with corpses. Bolstered with Crypt Fiends, it's your best shot.

Expansion locations are at the first Altar, the central island, and the second Altar.

When the Three Keys are pieced together, take a Zeppelin and drop off Arthas and anyone else at the Inner Gate. The mission ends when Arthas steps into the Circle of Power.

The approach given above certainly works, but it is not the best strategy. Great generals such as Frederick the Great and Napoleon, to name a few, have used the "strategy of the central position", and you can use it here. Start by fortifying your initial island, and use Zeppelins to scout as much of the map as you can. You will realize that you come under attack from all directions. The attacks are quite heavy, although the air attacks are the most dangerous, because 5 or more bombers at a time will do a job on your base if you are not prepared. You will also realize that you must expand, because you don't have enough gold.

You will learn that there is a heavily defended enemy base to the NW, and strong air attacks come from that direction. There is a heavily defended enemy base in the north, and a similar one in the SE corner of the map. It turns out that you can overrun these bases directly, but you don't know that yet, so it isn't prudent to try. However, there is a weakly defended island in the middle of the map that you can clear out with hit-and-run raids. There are three Way Gates on this island. Each one leads to a separate enemy base. After clearing out the central island, pop Arthas through each gate in turn. In principle, you should save the game before doing this, because you don't know whether the gates are 2-way! That is, before you try it, you cannot be certain that the gates are not just one-way tickets to Hell.

At this point, you should realize that you can employ the "strategy of the central position" by seizing and fortifying the central island. In addition, there is an unguarded gold mine here. With your gold supply secure, you can leisurely eliminate one enemy base at a time. You can also leisurely eliminate everything else on the map, although there isn't any real point in doing so.

You are already carrying the urn, and possibly five other items. The key requires one space (formed), and there is no window of oppurtunity to collect an item after using the key. This means you can only carry four non-essential items through to the next mission and the urn. Before collecting keys clear the bases guarding them so as to utilize your items in the assault on each, drop two items, collect fragments and retrieve one of the dropped items.