Early the next morning, on the outskirts of Stratholme... 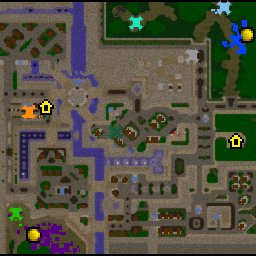 The minimap for this region is already explored; as such you can plan your attack to your satisfaction.

Take your initial time to prepare - on normal you have three minutes, while on hard you have two minutes, and on easy you have three and a half minutes. Don't expect to create a defensive choke point; while the enemy has to go through one main route to reach you, you can't seal it off beyond a simple attack force.

Once the preparation phase is complete (or you kill a Villager), Mal'Ganis teleports into the middle of the city (just to the north-east of the dark-grey X) and knocks down a City Building that was previously tagged as invulnerable. He demonstrates his power to convert Villagers; you may want to skip the cutscene if you've seen it before, as it slows him down by a few seconds.

There are two important concepts during this mission: attack and defense. The first is more important than the second, but you shouldn't forego the latter.

You need to defend your base from attacks, but not too heavily. The initial wave is repelled by about six Footmen and the stock Tower (but for good measure, build an additional one), and you can repel the following wave by adding two Riflemen to the mix, possibly four.

Once you have at least 50-75 kills, discard the defense and focus on attacking. At that point, you should be trying to finish the objective rather than bottling up.

You should only repel an absolute maximum of four waves. After defeating the fourth wave forget about defence and perform an all-out attack on the city.

The best way to win is to attack the City Buildings, so set up your units accordingly. Build a Blacksmith and start building Riflemen, as they allow you to more quickly dispatch Villagers before they become zombified.

If you can, get a second team in the field. This serves as a backup in case one gets slowed down when it encounters Mal'Ganis, but also doubles the rate at which you kill enemies.

Mal'Ganis is a Level 6 Dreadlord on easy, Level 7 on normal, both with 3 Levels of Sleep and 1 Level of Carrion Swarm. On hard, he's Level 8 and has 3 Levels of Carrion Swarm for extra damage. He starts with a few Ghouls, but as the chapter progresses, he'll end up having a dozen units. (Ghouls, Necromancers, Meat Wagons, and Abominations.)

If you manage to take him out, he will recover in three minutes (or 90 seconds on hard, four minutes on easy). This guide recommends avoiding Mal'Ganis. Once Arthas has killed 21 and 51 Villagers, Mal'Ganis will temporarily stop claiming Villagers and instead hunt the player for a while. Mal'Ganis won't attack your base though. 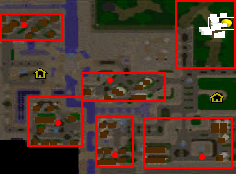 Mal'Ganis entry points for each building cluster. Mal'Ganis stays out of your base.

He has five entry points when he respawns or otherwise needs to teleport:

The Purple AI player will send its first attack within 4-5 minutes and keep sending waves after 4-5 minutes. On hard difficulty, you get attacked by four ghouls within 2 minutes, and the attack rate is increased to once every 3 minutes.

The following waves are worth noting:

While the AI continues sending waves after this point, you've likely already failed the mission by the time those waves arrive.

The base in the south-west corner cannot run out of resources, and destroying it does not impede Mal'Ganis from completing his objective (he is respawned from his own special base, which is unreachable and invulnerable.)