This mission is quite hard. It's not so much that it's hard in and of itself, rather the problem is that it's so different that you won't have a good idea of what you should do on the first, or fifth, attempt. Once you have managed to explore most of the map, however, your plan of action becomes clear, and the gameplay becomes fairly easy. There still are difficulties, but at least you can formulate decent plans. 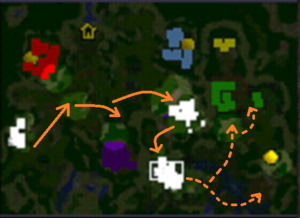 Split among 4 mines, gold is scarce on this map, at least for you. (Actually, there is a way of getting an infinite amount of gold, which will be described later.) You will be forced to relocate at least part of your base at least two times. Luckily, enemies are either weak or have little interest in you, fighting among themselves most of the time. Stay within the no-upkeep limit until your first three gold mines are empty.

You start with 2 Heroes, 3 Archers, 5 Wisps, 5 big walking trees, and some static buildings. And no gold, although a tiny mine beckons somewhat NE of your position. Can you go there right away? Perhaps, but you have no way of knowing that yet. What do you do? Scout the mine area, of course. With an Owl, of course.

You will find that the Orc base in the NW corner can only be reached by air. Since they have a bunch of Zeppelins, they can attack with air-mobile forces as well as air units. You will find that there doesn't seem to be much of a ground threat to the mine area, so go Entangle it. The mine should be ready to start producing gold by the beginning of the first night. Send all your Wisps in there and suck it dry.

Eliminate the creeps NW of the Undead base. They drop an Ironwood Branch (strength +1), which Furion takes. There is also a Potion of Healing in a box.

As gold comes in, produce one Archer, and 2 each Dryads and Huntresses. This gives you a combined-arms force of 12 combat units, and you are at 30 food. Get upgrades as you can afford them, but save any remaining gold for contingencies. When your first mine collapses, withdraw your economic units to your first base, and put your Wisps back on wood.

Early on, you will see the Orcs send some air units to attack the Undead. They are quite likely to ignore you. You might as well let them fight, or you might help the weaker side, or you might help the Orcs, or whatever. It really doesn't matter. All the factions have so much gold that you can never wear them down, you can never take their mines (with one exception), and you will get vastly more experience than you can keep. Shortly afterwards, you will see the Undead send air units to attack the Orcs. The main thing is to keep your army available to react to any threats. Because you cannot afford to build static defenses yet, and your position is wide open, this will limit when and how you attack creeps.

Try to attack the creeps in the north part of the map (near the Fountain of Health) shortly after one faction has sent an attack wave over. You will get a Ring of Protection +2, and a Tome of Strength in a box.

As you continue to explore the map, you will find that the Undead base can only be reached by air. They can only attack by air. There is another tiny gold mine north of the Undead base. You should eliminate the several Furbolgs close to that mine, but don't move far into their territory yet. Eventually, you will realize that you have no choice but to take over the second mine. Send all your Wisps to this mine.

Keep your army available to defend the immovable part of your base. The Orcs will be sending ground forces there, including Catapults. You should build 2-4 more Ancient Protectors there in a self-supporting arrangement.

Enemy air attacks will aim only at your current Gold Mine. Your army should be available to rush back to defend your mine, but note that the only time anything there is really vulnerable is when the mine is about to collapse and your Wisps are about to be evicted.

Suck the second gold mine dry, get any remaining upgrades, but save any remaining gold for later. Keep scouting. Unfortunately, Owls don't last long enough to cross the entire map effectively. However, you will get enough information to be able to understand this scenario.

There is a Human base not far to the NE of the Undead base. This base is quite weak, and doesn't do much. There is another Human base west of the Druids' rest home. They also attack the Undead with air units, and vice-versa. You will find that the only way you can make progress is by going right through the Human base in the middle.

After your second gold mine is empty, prepare a strong force to attack the Human base in the middle of the map. You don't really have enough gold to get a truly huge force, but you can walk some of your Protectors over from your first base to the NW gate of the Human base, or perhaps cash in some of your Wisps for Protectors. It turns out to be a good idea to not produce any more troops at this time (anyway, you already have one full control group), because, when you approach the NW gate, you recruit two more Huntresses.

Crush the Human resistance, avoiding the two Towers in the SW at this time. Produce a Ballista to deal with the Towers safely and otherwise replace your losses to get back to 40 population, including 5 Wisps. You now have access to a third mine that provides about 2,500 gold. Suck it dry as before. Defend this area with some Protectors. Because this area is now your major base, build at least a couple of Moon Wells here. From now until the end of the game, you will see waves of Human flying units pass by just to the west of your newest base on their way to attack the Undead, and vice-versa. Feel free to take some pot-shots; it makes no difference. Or just enjoy watching them fight each other.

After the gold mine is captured, the Orcs will stop attacking your immovable buildings at the starting location. (If this turns out to be incorrect, it doesn't matter. You aren't going back there anyway, either by choice or to defend against attack.) In fact, the Orcs, Humans, and Undead won't attack you at all anymore.

This would be a good time to eliminate the remaining crazed Furbolgs. Both of your bases are fairly secure at present, you have a decent reserve of gold, and your army will shortly be leaving this region. You will get a Potion of Mana in a box west of the north Human base. The Furbolg boss drops Claws of Attack +6, which is a must-keep item.

Exit your base to the SW. You recruit 2 each Huntresses and Dryads, which brings you to 52 food.

As you move along the path, you start to encounter undead units. You kill them easily enough. You keep moving forward. Then you realize that the units you have already killed keep respawning, except for the Ghosts. When you kill Ghosts in this region, they remain dead. Or undead. Or de-animated. Ghosts deserve special mention. They are very dangerous, but only when in direct contact. You need to kill them from range.

In any case, it quickly becomes clear that your current army cannot pass through this region. If you try fighting normally, you will run out of health. If you try simply running for it, you will find that that doesn't work, either. Extract the remnants of your force back to your base and regroup. 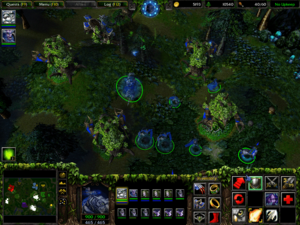 Undead check in, they don't check out.

At this point, you have two options. One is to build up a huge army, smash through the Cursed Glade, and take out the Dark Revenant. However, there is a better approach. Build a couple of Ancient Protectors and take them along on your march, along with a couple of Wisps. As you encounter the first undead, kill them off and recreate the glade in your own image. Bring up more Ancient Protectors and emplace them around your army. With 6 Ancient Protectors and a full control group of mobile units, you will be able to safely penetrate the Cursed Glade, although you should move forward slowly. The important thing is that you will be able to keep your mobile units at full health, and then you will be able to confront the Dark Revenant on your own terms. Of course, you should locate him first with an Owl.

It turns out that you cannot actually prevent the undead from respawning by this procedure (though this may have been fixed). It turns out that the respawning is triggered on movement, and not by the presence of your units. This means that your position will appear completely sanitized, but if any of your units so much as twitches, a bunch of undead appear right inside your position. Unfortunately for them, your massive local firepower will waste them all in an instant, and they won't even get to scratch you. There is a major positive side effect of all this. The hostile units are all creeps, and you will get 100-200 gold for each wave of these creeps. It won't be long before you have gained 5,000 or even 10,000 gold, and there is no limit to the free gold. 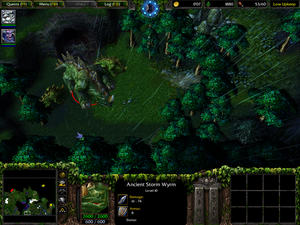 Completing the second optional quest will permanently remove any enemies that spawn within the Cursed Glade (otherwise you will be forced to fight undead each time you need to cross the forest). Take your army SE and defeat the Dark Revenant.

At the far west corner of the Cursed Glade, trees can be destroyed to reveal an Ancient Storm Wyrm (plus some friends) that drops a very powerful treasure.

As soon as you send units out of the Cursed Glade to the NE, Corrupted Night Elves will start attacking your positions. They don't pose any threat to your force.

The corrupted Night Elf base can be destroyed without capturing the last Gold Mine. Simply root some Ancient Protectors near the entrance to their base and place Ballistas on the east ramp overlooking the passage (destroy their two Protectors there first). The Corrupted Night Elves have no Wisps and won’t be rebuilding their base during the fight. Destroy everything and bring Furion Stormrage to the Barrow Dens to complete the mission.