One month later, along the icy coast of Daggercap Bay... 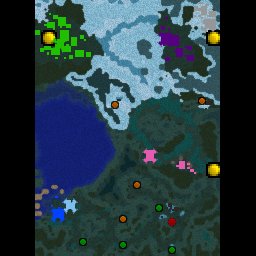 Now head back to where the second set of Frost Wolves were and continue moving east until you come to an Ice Troll Berserker and an Ice Troll High Priest. Concentrate your initial attack on the Berserker and the High Priest will fall without you taking too much damage. Sit tight and gather your strength. Just north of your new position is an Ice Troll camp that has three roaming Ice Trolls, six on hard difficulty.

The camp also consists of two Ice Troll Priests and an Ice Troll Warlord. There is no easy way of going about this; as soon as any conflict begins with any of the Trolls, they all come running. Have your party attack common enemies and watch their health as your Priest is unable to keep up with the damage. After taking out the Warlord you will receive a Potion of Greater Healing. Attack the buildings in the Ice Troll camp to reveal a Potion of Mana.

For the sake of experience, run your party northwest and you will encounter a group of spiders. A Spiderling is patrolling in front, with a Nerubian Warrior, a Nerubian Spider Lord, and a Nerubian Seer. On hard difficulty, the Seer is replaced with a Nerubian Queen. When you kill the Nerubian Warrior more Spiderlings will emerge, but they are easy. The Lord is by far the strongest of them all, so try to focus all your attacks on him, followed by the Seer, and you can handle the Warrior and Spiderlings with ease. When you are done you will receive an Orb of Frost that adds a bonus of six cold damage as well as slows the enemies' movement and attack speed for three seconds.

Finally, take your party all the way east until a cut scene of your troops being attacked plays. After the cut scene you will have Muradin Bronzebeard, a Level 5 Mountain King, his three Riflemen, and a damaged Gyrocopter. The first thing you are going to want to do when you are able to move is move all your available troops to the northern part of your newly established base to head off any attacks you may have from the Undead. Watch out for the air troops as only the Gyrocopter, Riflemen, Towers, and Muradin's Storm Bolt can hit them. Build four more Peasants and start building Towers to the north for more defense, as well as to repair your damaged Barracks. Build a Lumber Mill and send two of the four new Peasants to gather wood. Send one of the Peasants to build Farms and the last one to Auto-Repair your Towers. Also upgrade as your resources permit to allow for stronger units. Building a Blacksmith and a Workshop allows the creation of Riflemen and Gyrocopters which become very useful later on when you find the enemy air units picking off your ground units with ease. Note that since the Captain doesn't count against your food limit, he's essentially irreplaceable.

The base to the north is lightly defended and is easily destroyed. The forces there are feeble, being a total of 4 Ghouls and 2 Crypt Fiends, but the three Towers deter an initial rush. To rescue the Dwarven base in the NE corner, simply send a single ground unit. If you want, you can use the units in the newly claimed base to help crush the purple AI player. Entering this base will allow you to build Steam Tanks. These units are effective against buildings, but must be escorted by other units.

Not playing on hard?
On easy and normal, you can cripple his unit production by taking out the crypt at the front of his base. This isn't the case on hard...

Mal'Ganis's base is situated in the north-west corner of the map. Its defenders are mostly parts of the upcoming waves against the player. It's therefore quite possible that you'll encounter Gargoyles, which the player should counter with Riflemen. Add some Knights to take the brunt of the damage, and some Priests to heal the damage. Use Mortar Teams or Steam Tanks to demolish buildings faster. Unlike the enemy, upgrade all units before attacking, and the battle should be easily won.

Despite carrying his name, Mal'Ganis isn't found in this base, not even in this chapter.

Just as you learn about them, the purple enemy to the north sends only the occasional Ghoul and Crypt Fiend at the Dwarves under siege. They might eventually take out the base, but aren't a threat to yourself.

Mal'Ganis's base will immediately send units as soon as you started your base. However, his units are as strong as they are going to be, and won't become more difficult beyond quantity. He normally attacks from one direction, which is easily blocked. If you rescue the north-east base, he will likely attack that as well.

His Lich hero is Level 5, and not much of a direct threat.

Beyond treasures, this map is quite plain.

Go to top
← The Culling | The Shores of Northrend | Dissension →