Warcraft III: Reign of Chaos/Trudging through the Ashes

The Lich King's plague of undeath has spread through the Capital City and into the outskirts of Lordaeron. Shocked and disheartened by the loss of their beloved king, the forces of Lordaeron were scattered by the ravenous undead warriors. Now, Lordaeron is but a shadow of its former glory - and Prince Arthas has yet to be seen...

When this mission starts, you will have 2 Ghouls and Arthas. Since Arthas must survive the mission, you'll never want to send him without escort. Remember to keep your Ghouls alive with Death Coil and Cannibalize.

Follow the path until you come to your 1st Acolyte. Approach him and as soon as you get close to him, he will revert to his Undead form. After rescuing this Acolyte, move forward to the first clearing in the town. Be cautious as you enter; if the Villagers see Arthas or any Undead, they will call the guards to attack you. Your 2nd Acolyte is in the center of the square, easily identifiable by being completely red. You don't need to get too close to him to rescue him. Note that rescuing the acolytes will not alert the Villagers or guards. You may kill the Villagers if you wish, but kill the Footman, two on hard, first and get the Potion of Healing in the boxes. After killing the hostiles move to the left side of the square and follow the path up where your 3rd Acolyte will be waiting for you along with a single Villager. This Acolyte will give you your only Optional Quest of this mission: Find the Graveyard.

When you are finished with your 3rd Acolyte, move forward where you will be approached by a Shade. A Shade is an extremely useful scouting unit. Have the Shade head north to find your 4th Acolyte. Also, it should watch for the passing Captain and two Footmen, four on hard, one on easy, that scout the path. Arthas can then move in to free the Acolyte and kill the Villagers. After rescuing your 4th Acolyte, head south, using your Shade to scout ahead to avoid the enemy patrols. You will find your 5th Acolyte among two Villagers. On easy and normal difficulties, you can free this one without having to kill the Villagers. There is another Potion of Healing among the boxes. After freeing your 5th Acolyte head to the west, being careful of the Barracks being guarded by a Knight, two on hard; don't forget to use your Shade. On hard difficulty only, there's an extra Acolyte in front of the Barracks; this is the 24th Acolyte on hard difficulty. Your 6th Acolyte is hidden behind two other Villagers - these will call for help when threatened. 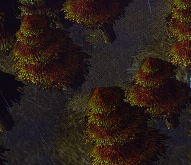 Find this path for easier access to the town.

After freeing your 6th Acolyte, use your Shade and move north to try and find the secret path to the left of the main gate. Once you find the path, be cautious going into the square. There are a lot of Villagers around. After emerging from the path, there is an Acolyte right ahead of you, making him your 7th Acolyte. The indicated box in the picture yields a Potion of Greater Mana, but be careful opening it, as it is guarded by five Footmen, four on easy, and three Knights, four on hard, one on easy. Run away if you're spotted, and use the Shade to find out when the coast has cleared. From where you freed your 7th Acolyte, move towards the north using the path on your left. Make sure to wait for the Villager moving in between the two groups of Villagers, and on the left side there is your 8th Acolyte hiding in a secluded spot. On hard difficulty, run south to a group of Villagers watching Robert and Tyler fight. This is the 25th Acolyte on hard difficulty. The Villagers will alert the guards, so run away, and wait until the coast is clear. From where you freed the 8th Acolyte, move east. Use your Shade to help you dodge one of the Knights that's patrolling here. Find the Acolyte hiding among the trees for your 9th Acolyte. Not too far north from your 9th Acolyte is the graveyard that lets you complete your Optional Quest. Your forces will be bolstered by three (permanent) Skeleton Warriors and two Ghouls. If you want more treasures, backtrack until you reach the patrolling Captain, as he carries a Potion of Greater Healing. Also, one of the Riderless Horse next to the Barracks has a Ring of Protection +2. You have to destroy the Barracks to get to it.

Farther towards the northwest there is a field and Town Hall that will be easier to take out and get another two Acolytes. Your 10th is north of the Town Hall in a field that has a pair of Villagers in it. To the west of the Town Hall is your 11th Acolyte, but to get to him, you'll have to destroy the Town Hall and kill the three Peasants, two on easy, that will turn to Militia when you get close to them. Two Bandits will come from the northwest when you get closer to the Town Hall and will attack the Militia. You can use them to weaken the forces present and then kill them once the Militia is defeated. Once finished with the Town Hall, head to the west where you will find your 12th Acolyte with a female Villager. After rescuing the 12th Acolyte, head north where you will find a camp with an Assassin and two Bandits, four on hard, one on easy, and a captured Acolyte that you can free, number 13. There is a Potion of Healing and a Spider Ring (adds 1 to Agility) dropped by the Assassin and one of the Bandits once defeated. Once you're done, head back to the gate you passed heading toward the field where you found your 10th Acolyte and have all of your units attack it. Once you destroy the gates, you will see Acolyte 14 being attacked by two Footmen, one on easy, and needing to be saved. On normal and hard difficulties, one of the Footmen drops a Potion of Healing.

Once done killing the Footmen, head east until you see some fenced-in sheep. There is an Acolyte mixed in with the sheep and you simply have to walk toward the fence to free him making him your 15th freed Acolyte. Head south and you will see your 16th Acolyte accompanied by some Villagers that you scare off. Doing this will attract a Knight from further down, a Footman on easy, both a Footman and a Knight on hard, but if you stay away from where your Acolyte was, after around fifteen seconds they'll move back. Head back up toward the fence and keep going east but keep close to the houses on the bottom unless you wish to kill the two Villagers, but regardless of whether you kill them or not, kill the two patrolling Footmen, one on easy. Afterwards head toward the south along their patrol route, and then make a turn east. You will see two female villagers and your 17th Acolyte. Note that you can detour to two secrets at this point. Have your Ghouls attack the trees south and southwest of the two female Villagers. The southwest trees hide two boats and a crate with a Scroll of Healing. The south trees hinder passage to a rocky expanse that culminate in two Mud Golems and a Rock Golem with Gauntlets of Ogre Strength +3. Go back, and after freeing your 17th Acolyte, move east. Be cautious of the Villagers between you and your next Acolyte. You can scare them off, kill them, or just sneak past them. Keep moving east until you can see your 18th Acolyte in the little clearing between the trees, and free him. Journey north, avoiding the Captain to the east for now. Kill the Villagers by the pyre; if one gets away, he'll alert a Knight on normal, a Footman on easy, and both a Knight and a Footman on hard. The 19th Acolyte is located north of the pyre. For your final four Acolytes, 20, 21, 22 and 23, journey back south until you see two Footmen, three on hard, one on easy, and a Captain guarding four Acolytes amongst some cages. The Captain carries a Potion of Greater Healing. Dispatch the Footmen and the Captain, then rescue the Acolytes to complete the mission.

There are several items that can be obtained in this scenario that are worth carrying for a long time, specifically, the Ring of Protection and the Gauntlets of Strength. However, Arthas is weak and alone, and one of those items is somewhat hard to find, and the other requires a serious fight. It probably isn't worth trying to get those items, because discretion is the greater part of valour, and there will be other, better opportunities later. Just grab what you can and get out.