This article needs images! If you have any images of the things detailed in this page(specific units), please add them to this page.

This article needs images! If you have any images of the things detailed in this page(specific units), please add them to this page. 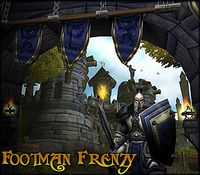 Footmen Frenzy is a Footmen Wars map for Warcraft III: The Frozen Throne made predominately by TheBigGame (formerly known as HatoUP), Metal.Bark, Cattlebruiser, and the rest of the Clan NoHunters team. The current official version is 6.5e, and is organized at http://www.nohunters.com/. 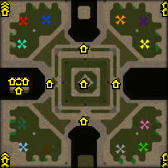 Players start the map in one of the four corners, along with up to two other teammates. The objective of the game is to defend your barracks whilst trying to destroy the other teams' barracks. The barracks (upgradeable to four different tiers) spawn units, starting with Footmen, and is also used to upgrade your army and revive heroes.

In the center of the map lies the Archvault, which sells consumables, as well as providing a high mana regeneration. Control of the Archvault is desirable, as it enables heroes to cast spells very rapidly. There are also Weapon and Armor shops to purchase items for heroes, and four 'personal' shops in each corner of the map which sell even more items.

Upon starting the map, players are given the choice of choosing or randoming a hero at the Hero stores. Once a hero is chosen, one of the players typically sends out his army, which is met by the other players' armies. Killing units gives a small amount of bounty and experience, and heroes give a great amount of bounty (typically 267 gold), as well as a large sum of experience. If a player leaves, his barracks and units are all destroyed, and his money is lost unless he transferred the money to another player first.

Footmen Frenzy is a game designed for anywhere between two and twelve players. Preferably, the game is played with a “Full House,” that is to say, with four teams of three people. Each player is given his or her own colour, as with all Warcraft III games, and the colour scheme is as follows:

When Footmen Frenzy first starts, each player has a "Home Base," or Tier Zero. This is where players can upgrade their units, their Tier's Level, and revive their heroes. The Tiers start at "Tier Zero," which spawns Footmen. As the game progresses, players are able to upgrade their tiers to any of the four Warcraft races: Human, Orc, Undead, and Night Elf. Afterwards, players are able to further upgrade their Tiers. In total, there are five Tiers per race not including Tier Zero. As of Footmen Frenzy Version 5.1, Tiers are delayed as to encourage the usage of heroes.

As explained earlier, each player has the option of upgrading his or her tier into one of the four Warcraft races. Each race five additional upgrades, unique to that particular race; in chronological order, they are as follows:

Tier 5 was first added in version 5.0. It was not meant to be a proper extension of the other Tiers due to balancing problems. Instead, it was made immensely powerful and was intended to be one of the many ways of breaking the stalemate of a long game. Tier 5 is not easily countered and the first team that manages to reach it will usually win the game.

Players can also upgrade their units in either attack damage or armor. Each race also has a "racial" upgrade which boosts the particular advantage of that race. The humans get upgrades on hit points and attack speed, the undead receive upgrades on attack speed and movement speed, the Night Elves upgrade increases the range of all its units, and the Orc's racial upgrade increases their attack damage and their hit points. Racial upgrades are only available upon reaching the second tier and up.

If a player wishes to do so, they can change their Tier to that of a different race for a price that increases with the current tier. For example, a player with Human Tier 3 can pay 700g to change to Undead Tier 2. There is no option to downgrade to a lower Tier.

The Human tiers are generally not used as much as the others, but many players underestimate their power. Once the player upgrades to Spellbreakers, he will be able to use Feedback. This is a passive ability which drains a small amount of mana, and also damages the unit for an equivalent amount, and is especially useful against Undead and Night elf units (which utilize mana for special abilities). However, the Humans' Tier 4 unit, the Knight, has considerably less attack power than the Undead Abominations or the Orc Tauren, but it makes up for it with its innate ability to stun units.

Orc units have the most health out of all the races, but only their high level units, Tauren and Peons, have abilities. Because of their large amount of health, Orc units are effective tanking. Generally, Orc units do the largest amount of damage per hit, but this varies on how much a player has upgraded. Disadvantages of Orcs include a slow spawning rate and the fact that Raiders give as much gold and experience as a Tier 4 unit, yet are much weaker.

Undead units usually come in large numbers, but they have lower health and more abilities. After Ghouls, all undead units can "Slam" the ground, slowing non-heroes for a few seconds. At the third undead tier, the Skeletal Mages can use Unholy Frenzy to improve their attack speed, but receive more damage at the same time. Upgraded undead units can do a lot of damage quickly.

The Night Elves in Footmen Frenzy have the lowest Health Points, but attack quickly and are all ranged. Because of their low health, they are especially vulnerable to Area of Effect spells such as Flamestrike, Rain of Fire, and Blizzard.

As in regular games, Footmen Frenzy allows people to buy heroes to command. As of Version 5.1, there were 40 usable heroes plus one secret hero, "Bill Kazmaier" who is only available if you choose the "Random Hero" option. Heroes are units with four specialized abilities and can buy items. Generally, heroes are the most important units in the game. Heroes are vital in a game as their spells can eventually do absurd amounts of damage. Unlike in a regular Warcraft III game, heroes in Footmen Frenzy can reach a maximum level of 18, and its abilities can reach level 6, while its ultimate ability can reach level 3. Because of their great value on the battlefield, most heroes usually give out 267 gold when killed, which is a sizeable amount considering one footmen is worth between 35 and 42 gold. Exceptions include The Avalanche, which gives out a 400 gold bounty due to its thousands of hit points, Bill K, the secret hero that can only be chosen through random who gives out a 512 gold bounty, and the Metamorphosized versions of Fox and the Demon Hunter, which also give out a 512 gold bounty.

Hero Killers are generally inefficient at killing units since their spells are more focused on one target. Therefore, they are a must at keeping the AoE heroes in check and away from their army. An example is the Death Knight, who has a powerful Death Coil attack that does a large amount of damage to a single unit.

Some Agility Heroes are also commonly used as Hero Killers—with agility and/or damage items and a Mask of Death, which grants life steal, they can quickly deal high amounts of damage to Heroes whilst healing themselves in the process. An example would be the Blademaster, whose passive Critical Strike spell ensures that a certain percentage of the time, his attack will do many times the amount of his normal damage. Another would be Jaood, who has the Bloodlust ability, letting him move and attack extremely fast.

AoE (Area of Effect) heroes are a popular choice, because of their tendency to rapidly earn huge amounts of gold. Their spells allow them to kill many units quickly. An example is the Archmage, who doesn't have a lot of HP, yet has a spell called Blizzard which deals a good amount of damage to units in a certain area of effect.

Support heroes rely on their armies presence for effectiveness. Support heroes are usually seen using disabling spells, auras, healing spells, or more. An example is the Shadow Hunter, who can heal his army and use hex to disable heroes.

There are two irregular heroes in the game: the Death Sheep and Avalanche. Essentially, the two heroes are polar opposites. While Avalanche can have several thousand health and 600+ damage, the Sheep starts out with only 150 health, less than a Footman. The sheep also moves extremely slowly. However, the Death Sheep has an advantage in its spells. The sheep's basic spells are Starfall, Big Bad Voodoo, and Tranquility—normally level 6 spells. If a player is able to cast one of these ultimate spells without dying within the first minutes of the game, it usually guarantees a win. Avalanche pays for its massive health and slow, but strong attack with its abilities. The only Active ability it has is "Blink", allowing it to teleport a short distance. Its other abilities are all passive, and simply boost the Hero's armor, the armor of surrounding allied units, and cause enemies attacking you to receive a percentage of their damage dealt back to them.

Not all Heroes are of a single particular type—many are a combination of two or more types. A good example is the Dreadlord—his skills include Vampiric Aura (a supporting aura), Carrion Swarm (an AoE spell), and Sleep—which, with a supporting army behind him, can quickly be used to surround any Heroes caught off guard.

Items add another dimension to Footmen Frenzy. Many players buy items for their hero to increase their efficiency. There are also items which help your army as well, such as the Scroll of Speed. However, players which invest too much in items leave their base vulnerable, as Tier Zero bases have a low amount of hitpoints.

These shops are all located in the back of each team's base, and is only accessible to the players of that team. Any enemy unit trying to go near the shops will be blocked.

Creeps are non-hero non-regular units that can be bought at the creep shop. They are an essential part of your army. They come at a low price, but you are restricted to 3. This is due to the creeps each consuming one food, while your base only produces 3. The only creeps that do not require food are the peasant and the goblin zeppelin, as they do not have any spells that weaken the enemy or strengthen its allies.