After being waylaid by the undead and assisted by the night elves, Prince Kael'thas arrives at the ruined city of Dalaran. There he meets up with the commander of the shattered Alliance forces, Lord Garithos. He is tasked with repairing the city's magical observatories, in order to detect any approaching threats. 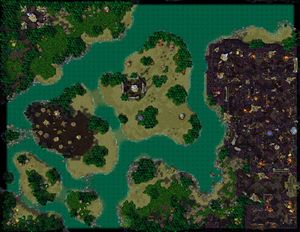 Overhead view of Dalaran, the lake, and its various islands.

Moving through Dalaran is pretty straightforward. Spellbreakers are immune to Kael's flamestrike, footmen and priests are not however. Banish will increase the damage of flamestrike by 66%, but using the combination is very mana intensive and banish will not last long on higher level enemies so use it on the next strongest enemy instead if faced with a particularly strong enemy leader. Spellbreakers can also assume control of summoned units, this includes skeleton warriors and mages created by necromancers. Try to conserve as many units as possible however for defending your base later, this of course is less of a concern in fights with a resurrection rune as a reward (see treasures).

Before thinking about sailing to the northern gold mine to avoid attacks by the undead be aware they possess air barges and can still harass your settlement. It's best to setup at the closest mine (12,500 gold available) so the walls of the second observatory, mana well, well treeline and shore can be utilized in your defensive line. Even on hard difficulty the undead always pass by the mana well, and will rarely (if ever) attack a mining or timber expansion elsewhere.

Clearing out the trolls to the north, northwest and placing your lumber mill south of the merchant between the three copses of trees is ideal. It's also possible to place it near Dalaran, but once the undead are gone the need for an abundance of resources drops considerably.

The simplest defense is a good offense, so don't spend too much time or resources on towers and instead just repair the observatory to get early warning of incoming attacks and camp Kael and company at the mana well while researching upgrades. When ready train an attack force and wipe out the undead base to have free reign of the map and zero pressure.

Kael can use his flamestrike ability to destroy trees, which will come in handy for locating treasures.

This results in an additional 9 attack, 90 mana, .3 mana/sec regeneration and 150 HP. Being able to buff the strike force's damage by 25% and heal them in the next mission far outweighs the very minor benefits of the other permanent items (25 HP, .05 HP/sec regeneration, 1.3 armor, 2% attack speed). Save the wards and scrolls for wiping out the two large, non-quest related undead bases as soon as possible in the following mission.

Go to top
← The Brothers Stormrage | Misconceptions | A Dark Covenant →