Warcraft III: The Frozen Throne/The Rise of the Naga

Though the demonlord, Archimonde, and the Burning Legion were finally defeated at the Battle of the Mount Hyjal, much of Ashenvale Forest remains tainted by foul, demonic energies. The combined efforts of both the druids and the Sentinels have brought a tenuous peace to the northlands, but dark creatures still lurk within the shadowed woods. In this perilous time, Maiev Shadowsong, the warden who once guarded Illidan's barrow prison, has come to hunt her dangerous prey -- and chain him once gain beneath the cold earth. 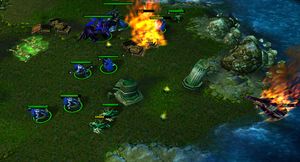 These fishmen should barely do any damage to you.
Making use of Blink
When exploring the coast, you might find some land in a distance. You can use Maiev's Blink to uncover hidden areas!

You see Maiev splitting up her group in three, and then you take Maiev's squad to hunt for Illidan. You get 5 archers and a huntress called Naisha as company.

Destroy the damaged Elven Gate in front of you. Advance the gate and you will spot a razed town with full of skeletons and wreckage. A bit to the north you will find some angry Mur'gul fishmen on the coast, who will immediately attack you. Try to position the archers in the rear so that the Mur'gul won't focus them.

You can explore quickly the whole town, however nothing interesting can be found apart from some breakable crates. At the northwestern entrance of the town, you will find a Rune of Lesser Healing, which immediately heals your troops as Maiev collects it.

The Furbolg nests can be destroyed to uncover loot.

Upon passing the gate, the archer will notify upon the Furbolg running amok in the neighbourhood. At a burning pillar you will find some breakable crates that have a Jade Ring in it. On the way south, three Furbolg Blazetrailers will attack you upon provoking, whom you can easily melee with your troops. A bit to the south you will find a small settlement of Furbolg nests guarded by an inhabitant. Destroy him and the tents. One of the tents hides a Rune of Mana. There is another settlement just a bit on the way southwest, with its guardians to destroy.

Maiev should be halfway well on the way to level 3 when the monsters are killed.

The Satyrs ambush you!

Follow on the trail westbound. Suddenly four Satyrs will attack you with dirty rods. They will cast Curse on some of your units, however you should have no problem defeating them. They will severely hurt your archers though so pull back any of them with low health. Later on the trail, you will meet a squad of yours, who are desperate to report that a mad Wildkin beast attacked them and caused severe losses. The optional quest of slaying the Beast should now appear.

Creep intelligence
The Wildkin and other level 5+ creeps have a bit better intelligence than lower level creeps. They will always focus weak units and run away when low on health.

Just north to the meeting point there is another razed village with some Mur'gul residing at the waterfall. In the breakable crates you will find a Rune of Mana. Exiting the town will reveal the rampaging Wildkin, which ran to the east down from the road. You can head there for some hefty experience and a Tome of Agility. Beware of the War Stomp that stuns your units!

Maiev should have got her level 3 by now. You can either level her Fan of Knives or learn Shadow Strike, a great "Damage over Time" ability.

Follow the road to the north to a Rune of Healing and a rubbled gate. Upon this point, Maiev's company will spot a group of Naga warriors destroying another Night Elf town. Upon taunting, they will eventually attack you. The Naga are numerous and some of them will implant Parasites that emerge a minion after consuming their host. You may lose a unit or two to the debuffs, but the Naga should be easily defeated. Head to the west out of the city and you will find a Fountain of Health with a Rune of Mana. Regenerate your soldiers after the battle.

Head to the north and you will find some Mur'gul chilling out in the water. Kill them and you should soon find the third squad, being under attack by another vanguard of Satyrs. When you kill the Satyrs, the survivor Huntress will tell you that her remaining people are held by savage brutes. You can go after them and rescue them as an optional mission. They are not far from the road if following the pathway along. The Satyrs will have a "boss", who is watching over the battle, but focusing them should net an easy victory over the brutes. Two cages will open and dryads and archers will emerge as reinforcements for you.

When destroying the big gate, Illidan and his company can be seen at a harbour. Illidan will flee on a ship, and the Naga are eager to destroy the ships so that you can't follow the Demon Hunter on the way. You must stop them at any costs. Various beasts will attack you, even flying monsters. You should focus one enemy at a time and even if you start losing archers, just ever care of Maiev, whose loss should result in a mission failure. You can destroy some crates to reveal healing and mana runes. When you kill most of the marauders, you are free to pursue Illidan and the mission is completed.

Go to top
← Warcraft III: The Frozen Throne | The Rise of the Naga | The Broken Isles →