After your girlfriend is stolen, run to the right. Continue past the vines and shoot the enemies that are immediately visible on the ground, before returning to the vine and climbing it. Wait for the first enemy to jump overhead before jumping up and shooting it. Jump to the platform above the treasure chest, then down to the platform on the right, and jump into the alcove where the treasure sits. From there, you should try to jump back to the right, but if you hit your head, you'll fall down, in which case you should return to the first vine to your left. Jump up and over to the second chest on the right. From there, leap to the right, and shoot a fireball so that it hits the wizard waiting on the high platform as you move through the air. 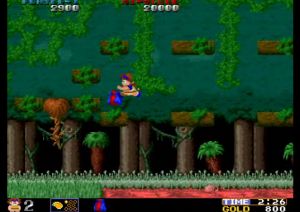 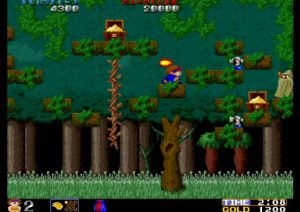 Jump up and shoot the wizard on the platform above the vine. Then drop down to shoot the enemies to the right. After an enemy drops down to the floor, jump across the gap and into the alcove on the right, where you will receive a hidden 300 coins. Then fall down to the floor. As you walk to the right to the next vine, you will see a group of cannons. If you keep walking to the right, past the vine, and scroll the left cannons off the screen, you can return to the vine and climb up without having to worry about the left cannons. Jump up in front of the top right cannon and squat down until it fires over your head. Then jump up to collect the treasure chest and the remaining cannons will disappear.

Jump to the right, and you'll see two wizards, one below you, and a small enemy running between them. You can kill the far wizard and the small enemy by shooting fireballs from the platform above the left wizard. Then wait for the wizard to throw a fireball before dropping down to his left. Shoot him before he can fire another one, and collect the treasure chest behind him. Then jump over to the vine on the right. You can climb down and shoot the enemy hopping over the gaps, or try to leap off the vine to the right and bypass it. 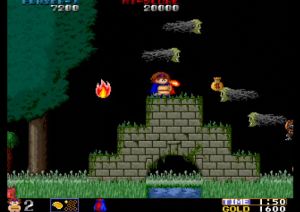 You will reach a small stone bridge. When you cross the top of it, six enemies will appear, three above and to the left, and three below and to the right. Stay in the center, and take out the enemies as they get close to you. (Although only four enemies appear in the FDS version, this is a good opportunity to use the bomb if you collected it.) When the path ahead is clear, approach the first vine to your right. Jump up and climb a short distance up the vine, but not all the way. In order to reach the next vine, you can't be too close to the top, or you'll hit your head on the ceiling and drop to the floor. Climb roughly halfway up and jump over to reach the next vine. When the vines begin to descend, make sure you climb all the way down to the bottom before jumping over. 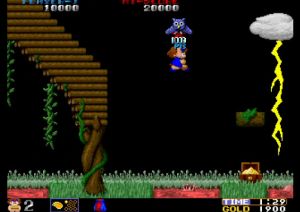 Beyond the vines, you'll see a blue owl flying up and down, holding a ring. Jump to the ring to get some help leaping over the bog. If you let the owl take you all the way to the top, you'll earn 1000 bonus points. Then leap down and collect the treasure chest below the platform when the thunder cloud is on the right side. Use the next vine to leap over to the next piece of ground where you'll find a large crystal that will upgrade your firepower from one to two. Then you must jump back to the previous vine and climb up to the platform above. Watch your timing so that you don't get struck by lightning. Then leap over to the next vine and hop aboard to floating platform. Once again, you must time your trip so that you avoid getting struck by lightning. Hang out on the left side of the platform before leaping over to the right. Then follow the path to the right to reach the boss. 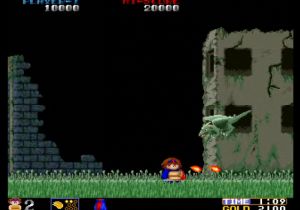 The boss of this level is a rather subdued dragon who does not breath any fire at you. You will encounter similar dragons later in the game which are much more dangerous, but for your first battle, all you have to do is wait for the dragon to fly down to the ground and pelt him with fireballs. After rising up and down several times, you should be able to nail him with enough fire that he bursts into flames, allowing you to proceed to the shop ahead. For the first shop, it is actually recommended that you not buy anything so that you can save up for the Sun Fire magic and buy it as early as after the next stage.