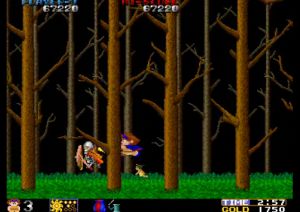 When you first arrive in this forest, you will be attacked by a set of shield bearing ghosts. They can’t be attacked from the front, so you must duck beneath them and shoot them in the back before they turn around and repeat their attack. If you purchased the Sun Fire weapon, be aware that your fire will rise up in the air and remain level with you as you jump.

After you clear the woods, a set of wizards will attack you around some statues. These wizards will remain on the ground and fire at you, but if you fire at them, they will leap in the air and hurl a fireball down at you. Jump over their attack and fire at them at the height of your jump to take them out. 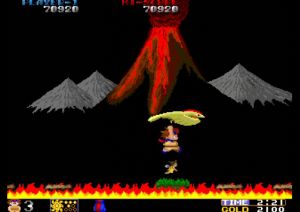 Just before you reach a lake of fire, a weird insect-like creature will appear. If you jump up and shoot him, he will provide you with an Ocarina. Carefully cross the lake by jumping to the floating platforms after they have risen so that you don’t sink into the flames. If you collected the Ocarina, a large phoenix will fly into view once you reach the small grassy island in the middle. If you like, you can leap forward into the phoenix’s claws and let it carry you all the way to the end of the stage. You can also let go of the phoenix at any time by pushing down. If you did not grab the phoenix, you must cross three more floating platforms above the lake. (In the FDS version, there is no Ocarina, and a balloon will appear every time which serves the same function as the phoenix.)

After crossing the lake, you must pass through another forest which has two threats. The first threat is in the form of small rocks that grow into monsters which lurch toward you. They are fairly easy to defeat, but the second threat comes in the form of very large fireballs that appear at the top of the screen and rain down above you. While attacking the monsters, you must be sure to watch the fireballs above and move to a safe location so they don’t fall on you. 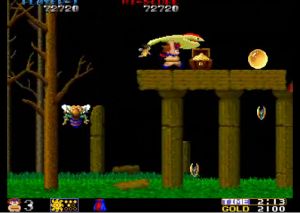 You’ll see a small structure next with yet another odd insect enemy flying in front of it. If you shoot it this time, it will provide you with jump shoes. These shoes are good for only one jump, so if you intend to leap up to the top of the structure, make sure you don’t miss. If you’re still hanging on to the phoenix at this time, you’ll automatically collect the treasure are large crystal on top of the structure. Watch out for the bats under the structure, and the wizard just beyond it.

You’ll have to cross another lake of fire. Leap across the first two floating platforms to reach a set of grass island with pillars of flame that rise up between them. The flames move in a specific pattern. Watch them and leap over the flames when they briefly sink below the surface of the lake. Then cross to the other side using the last two floating platforms. Watch out for a few more stone monsters as you approach the boss. 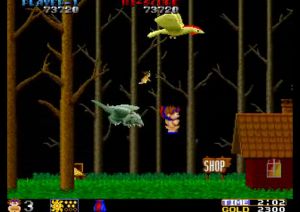 Yes, it’s another dragon, and this is the most dangerous one of all. Not only does it breathe fire when it drops to the ground, it also fires a burst of flame at you at the height of its flight, just like the jumping wizards. Of course if you let the phoenix carry you throughout the stage, he'll deposit you just beyond the boss so you won't have to fight him at all. If not, you must be on guard for both flame attacks. Jump over the ground flame as usual, but either duck, jump or move entirely out of the way for the aerial flame. Naturally, you should shoot it in the head as soon as it starts to rush you so that you can cancel its motion. Staying back as far as you can should help protect you from the aerial flame. Focus on jumping over the ground flame and shooting all the time. In the shop, buy any of the last three items as long as you already have the Sun Fire weapon. This is your last chance to spend any money.