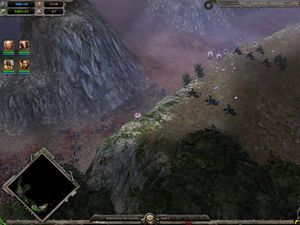 This mission is straightforward again, but at least you have new enemies. You must take the Force Commander and Librarian to the end of the map, which predictably involves destroying all enemy forces. 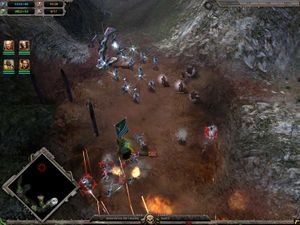 Take these gates out quickly...

You start with a couples of squads, several commanders and a resource problem, not having any Strategic Points in the immediate vicinity. There's no need to defend your base so take all your men and go for the two nearest SP's right away. Send the Scout Marines north and move everyone else east (you'll meet a broken squad of Orks on the way). When you have the two SP's and a Servitor on the way to build Listening Posts on them, stop for a moment. 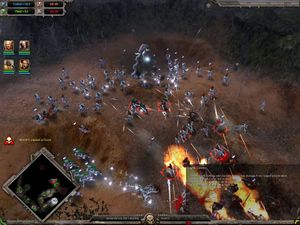 The third Strategic Point will have an enemy Listening Post, a squad defending it and the thing this mission revolves around - a Webway Gate. These structures allow Eldar to teleport around, so you must take them down fairly fast or you'll be overwhelmed with infantry spewing out ad infinitum. Before you press on, build a fortified LP on the second SP and leave one squad (and maybe a turret) to guard it as Eldar infantry will jump over the forest in a Falcon Grav Tank every now and then. When this is set and you have at least 2 squads for the attack team, you can move east. The Eldar troops are range-based (mostly light) infantry so flame or melee them while you shoot them full of holes. Have one squad target the Webway Gate right away with long-range weapons (heavy bolters will do, it's fragile) to stop reinforcements. 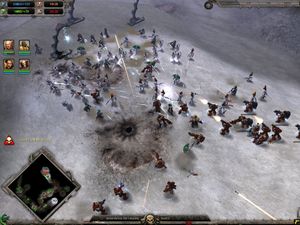 Final fight. Use Dreads if you like it easy.

When you have the third SP, stop again. There's a long pass that's negative cover all the way, and you'll be ambushed from above when you try to use it. Send a Skull Probe (not infiltrated) to make the Dark Reapers appear on the ledge. Now you can do as Angelos suggests and drive past in Rhinos to climb uphill and melee them, or just walk 1-2 assault cannon Dreadnoughts to the pass and shoot the ambushers from below. Dark Reapers have so bad anti-vehicle damage that your Dreads will barely be scratched, even if they're standing around in negative cover. While you're at it, there's another SP and Webway Gate at the end of the pass so go sweep that before heading up the path from the crater.

On this path there's a couple more Webway Gates you deal with in the same manner. Warp Spider Squads will appear behind you as you move along the path, but if you lead with a flamer squad that's not a very good idea, really. They'll be demoralized in seconds and then shot up by your following bolter/plasma squads. When you reach the Ork camp under attack by Eldar, stop again and scout both sides with Skull Probes or Scout Marines.

The Orks have a basic camp (they're quite passive in there) while the Eldar have 3 Webway Gates. It's better to take out the Eldar first. You can do it with nothing but infantry (1-2 missile squads take out the Vypers and Gates while other squads fight the infantry) although it's easier to lead with Dreads or stay far and nuke the place with Whirlwinds. The Orks don't put up much of a fight. You can make a secondary base here but you won't need it.

A bit west you'll be ambushed by several Warp Spider Squads on the path, then there's a ridge with 3 more Webway Gates. This is the final fight. If you like a good fight, attack them with only your infantry, but if you want to be unfair send the 7 or so Dreadnoughts you probably have - they have no anti-vehicle units so that's that.

To win the mission, move Gabriel and Isador to the objective marker beyond the "final fight" ridge.