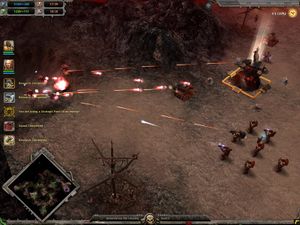 These Horror raids require some defense around your LPs.

The final mission is a kind of a tactical anticlimax, being bafflingly easy. Your only objective is to kill the Daemon Prince. This is actually even possible with the force you start with, but this guide will focus on the "conventional" way. 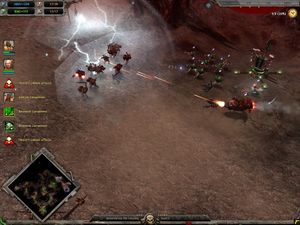 Send something small like this to help out the Eldar base and they'll distract the enemy a bit.

First of all, you want to be somewhat aggressive/expansive from the start, but not quite as much as in the previous mission. You will often run into Possessed Squads, so sending single squads to take points is risky. If you take 2 squads and a vehicle or commander, on the other hand, you can usually defeat even a larger force quite easily. 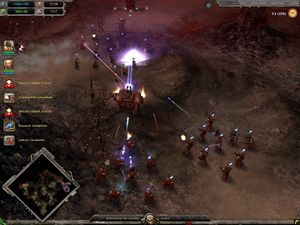 Get a single tank and the map is yours.

In the beginning you have some Possessed right on your doorstep so get rid of them (dance with your Marines) and get the nearest SPs. Anytime you expand, you need a basic defense for your SPs because of Horrors spawning from the pits all over the map. You should be able to expand both left and right from the start; you want the left side because of the Relic and a Chaos base in the far corner, and the right side if you want to keep the Eldar alive. Making a "chain" of fortified LPs up their way makes it easy to throw some mobile units (a Land Speeder, an Assaut Marine Squad) to bolster their defense. Helping the Eldar is purely optional - they don't play it very smart, sending rather doomed infantry attacks against the Chaos base. Eventually a Horror rush will overwhelm them, or they will manage to piss off the Daemon Prince who'll follow them to their base and raze it. 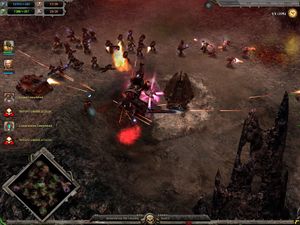 Sooner or later, this is how it'll end for Sindri.

So keep expanding and fortify the SP closest to the Eldar base at your right, pushing towards the small Chaos base on your left. When you get your first lascannon Predator you should destroy the little base (if you didn't already). Take the central part of the map and then go up north around the main Chaos base with 1-2 tanks and a squad to take their SPs. Your aim is to cripple their economy again; if you start doing this from the go, you will never see a single enemy vehicle. While you're taking SPs, remember that the Eldar have very limited resources, so if you want to see what they'll do you can leave some SPs uncaptured (you can decapture them from Chaos, of course). Alternatively, you can use the diplomacy menu to give them resources.

When you have taken most of the SPs on the map, it's over. Sooner or later the Daemon Prince will be provoked by a raid and come out of his base. He will run into your army, who will overwhelm him with concentrated fire (you don't need even half of your army for this). Then you win. If he doesn't come out, take your full army and smash him in his base.

There are cooler tactics to beat Sindri, such as stunning him with Assault Terminators and double Orbital Bombarding him, or drawing him out of his base early with Scout Marines to kill him with your initial troops. Feel free to experiment.

When you get Sindri, you win the mission. Congratulations, you just beat Dawn of War on Insane!