Warhammer 40,000: Dawn of War/Destroy the Xenos 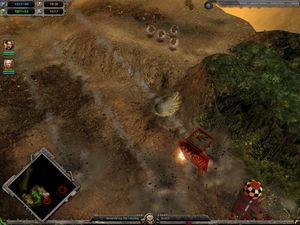 The wimpy way to take out an Ork camp.

This is another Ork cleaning mission with nominally different objectives but it's the same old scenario. 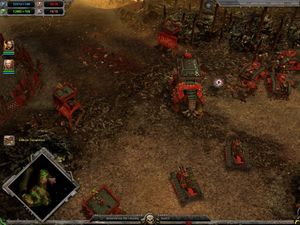 These and a lot more waiting for you at the end of the bridge. 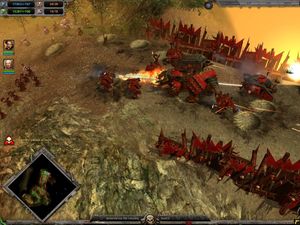 No clean way to do this, but being surrounded by Dreadnoughts is unhealthy for anyone.

When the Orks are gone, you get to build a base. The enemy will jump Stormboyz over the northern trees every now and then (until you control the other side) so keep a squad there for now. While you set up the base, go for the third Strategic Point right away. When you have a few heavy weapons, destroy the Ork Listening Post sitting on a ledge and capture the fourth SP with Assault Marines.

Go around the bend and south to take out the smaller Ork base first. Post 2 anti-infantry squads (the enemy is starting to use heavy infantry, so use plasma squads as well as heavy bolters) by the river to stop attacks from the other side. If you want to spare your troops, edge southward with infiltrated scounts and blow the camp up with 3 Whirlwinds. You could also go with a Dreadnought rush and infantry support, though. When it's down, build a secondary base (if you need to build reinforcements, they'll be closer).

On the other side, guarding the camp entrance, you'll find a Squiggoth (their Relic unit) and a bunch of vehicles - on Insane, a really big bunch of tanks that will be a bigger problem than the Squiggoth. Approach with something they can see to trigger a Squiggoth charge (hopefully all your infantry wasn't on the bridge) and kill it at your end. Sadly the vehicles and Warboss coming behind it will prevent you from owning it without casualties. To avoid wasting a lot more time for an identical result, simply surround it with 5-6 Dreadnoughts and missile it. Shoot the Warboss with bolters/plasma/snipers. When they're dead, attack the tanks with any remaining Dreadnoughts and missile them. You will lose some Marines and Dreads, but once this is done the rest is a cake.

Note: On Normal and Hard the Squiggoth and Warboss tend to keep running away, meaning you'll get them later when half of the Ork camp is probably already down.

After the bridge, you once again advance with infiltrated scouts and take things apart with missile launchers or Whirlwinds. Go north and south around the central camp before attacking it head on (you can take many buildings down over the walls). If you prefer, you can Whirlwind most of the central base without setting foot inside. Otherwise, it's Dreadnoughts and heavy weapon squads (probably more fun).

When this is done, you win the mission and the Orks should be out of the picture for good. On to the next mission.