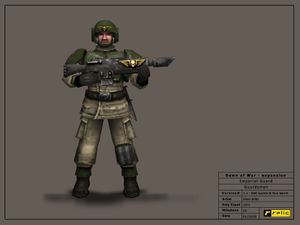 The Imperial Guard is the main fighting force of the Imperium of Man. They are not a full faction in Dawn of War, but you can occasionally use some of their units in campaign missions.

The Guard are the normal guys. They don't have extraordinary abilities or training or even technology. What they have is numbers. With the Imperium of Man controlling around 1,000,000 worlds the amount of soldiers available to the Guard is mind-boggling. They have more fighting men than some alien species have population. So even if their individuals are weaker than those of other factions, dozens or hundreds of them shooting at you tends to add up. It is said that if Space Marines are the Imperium's sword, then the Guard must be its hammer. They simply overwhelm the enemy, and should it fail, they just get more men and attack again as long as necessary.

In addition to their numerous infantry, the Imperial Guard tends to rely on vehicles more than the other factions. They have quite a variety of mechanized stuff, although most of this is not seen in Dawn of War (but that's what Winter Assault is for).

Brom is the local Imperial Guard commander, available to you in a couple of campaign missions. He's good in melee but still the weakest commander, with only half of the Force Commander's health. You may want to attach him for the morale bonus, though he can take basic infantry squads by himself if necessary. Brom will respawn if killed.

The basic Imperial Guard infantry unit, Guardsmen are sort of weak but also cheap and numerous. They can be upgraded with grenade launchers or plasma guns; the latter has higher damage but the former will disrupt enemy infantry. However make sure you don't support melee units with grenade launchers or you'll find them all over your screen as well. When you have Guardsmen, it's better to keep them behind your Marines - they have low morale and health so they just end up being broken and whittled away in short order if in front. From the back, they can provide a decent amount of supporting fire to your main force.

A basic "workhorse" tank that is somewhat effective against everything. The battle cannon has very long range, decent vehicle/building damage and lots of infantry disruption power. The heavy bolters will mow down infantry that gets closer. If the enemy has mostly anti-infantry weapons, spearhead with this and follow with infantry, they will hardly scratch it. When facing anti-tank weaponry, you may want to keep these way back and utilize the huge range of the main cannon.