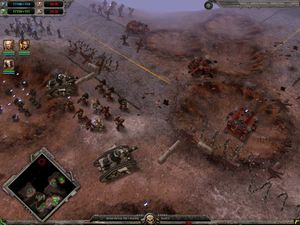 That Ork defense may need some help. Always repair when you get a breather.

This seems to be where the difficulty steps up, at least for Insane. You must destroy Webway Gates all over the map and reach some sort of ancient Chaos dig site. You'll have to struggle, but be patient and you'll win. 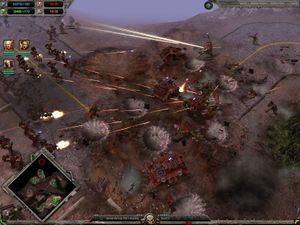 Get that Kan first, he will mutilate your vehicles.

You start with no base or Servitors, but you only need to take out one group of Eldar to get those. Tie up their infantry with melee units and shoot with Tactical Marines. Your Dreadnought must take on the Wraithlord, and I suggest you help with the Force Commander. You should win with minimal or no casualties. Move a bit north and you get to base-building. 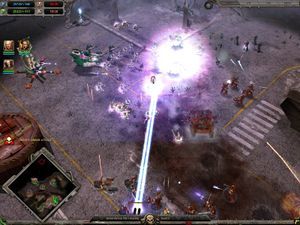 Upgrade your tanks with the big lascannon; leave those side bolters in for anti-infantry.

Now it gets a bit nasty. Eldar will attack your base from the forest southwest and from the river west of your north SP. You'll want something like a commander, a heavy bolter squad and a vehicle (melee Dreadnought or Predator with big lascannon and two bolters) to both locations. It's tough at first because you don't really have what you need - especially if they bring vehicles. You may have to beat at some early tanks with your commanders because they could come before you have access to missile launchers, not to mention vehicles. On the other hand, they don't have anti-vehicle weaponry either, so once you get a walker/tank they can't really hurt it. 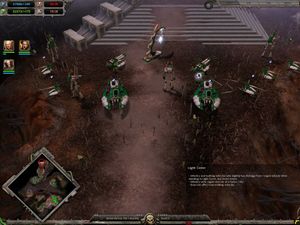 Attacking this will cost you.

Additionally, you must help the Imperial Guard troops holding back Ork attacks up north. If you don't constantly keep an eye on them, they'll be gone soon, and you know who's going to be the one holding back Orks then. There will be frequent assaults by a combination of a Big Mek, a Killa Kan and a Looted Leman Russ Tank supported by infantry. So you want a minimum of 1 missile squad, 1 heavy bolter squad and 1-2 vehicles (Dread or Pred equipped like before) guarding the Guard. Put your units in front of the Guard units, as yours are more durable and if you lose a tank you can rebuild it - if you lose a Leman Russ, you're not getting another. When the attack comes, have your anti-tank weapons target the Killa Kan first and the Looted Tank second, while the others kill infantry. When the attack is over, quickly repair all vehicles before they come again. They attack often, you have no way to stop it, and it will go on for the whole mission; it's very tiresome.

So when you have a defense that holds up at all these locations, you can start taking out Webway Gates. Scout with Skull Probes and start wherever you like (they are all over the place). You don't need a big force - 1 vehicle with 1-2 squads is usually sufficient. The Eldar production bases are in the forest next to your base, in the other forest way up north, and in front of the huge ramp northwest (they also have a weird secret base only reachable with jetpacks but forget about that one). Taking out their stuff is actually very easy, the Orks will likely trouble you more.

It's the final Eldar base that will turn your hair gray. When you push up the big ramp where there's Slag Deposit, stop to build a secondary base here before moving on, it'll save you time as you're about to lose some troops. Then push on and fortify around the SP right before the Eldar base. Upgraded LP, turrets, Tactical Squads, a tank or two - what you can fit there. When you reach their base, they'll start making crazy counterattacks with hordes of infantry and Brightlance Platforms (and the Orks are still attacking every few minutes too). The Brightlances will turn your vehicles into Swiss cheese and if you move too close, they will bomb you with Fire Prisms from inside their base. Remember that Brightlance Platforms are heavy infantry, not vehicles, so shoot them with plasma. One flamer squad demoralizing their infantry hordes will help you a lot.

Whenever you beat back an attack, try to push inside their base and kill something. Your first priority would be the Fire Prisms. Maybe take out one at first and another one on the next try. Throw something in to distract and try to missile/lascannon them from distance. It gets a lot easier after you get those Prisms and the central Webway Gate down. There's also a ledge over the base where you can be a nuisance from; it's hard to reach any good targets from there but you could try Whirlwinds or jumping Assault Marines in to meltabomb the base.

When you crack their defense and reach the dig site you will win the mission.