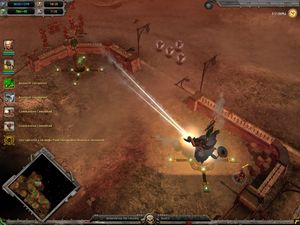 Just this can win you much if you send them in early.

Here you must destroy a) Isador and b) all Chaos units and buildings. There are three Chaos bases; directly behind the Relic "pyramid" and on both sides, i.e. to left and right from the Relic. All will launch mixed-force attacks so hopefully you perfected your defense in the previous mission. 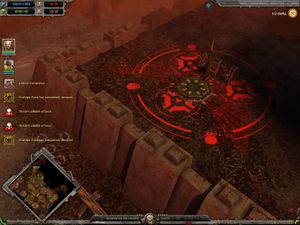 Sneaking behind to OB a base can help.

This mission should be played a bit differently than most campaign maps. You don't want to turtle at all - most of the map is unclaimed when you begin. If you make, say, 2 Scout Marine Squads and 4 Servitors right away and start capturing SPs aggressively, you can have everything on your side of the river - around 10 Strategic Points and a Relic - before you even make enemy contact. This will give you plenty of Requisition and make it hard (impossible if you play it good) for the enemy to attack across the river at all. If you stay put and let the enemy get all the SPs, they will really make you feel it. 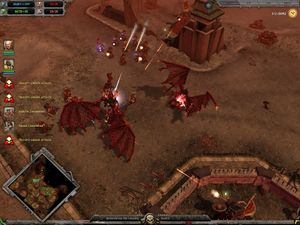 Situations like this can be uncomfortable (there was a third one a bit to the right) but keep cool and dance until they die or run away.

So - hit the ground running and start getting SPs. You need several Servitors to LP them while building a base at the same time. Try to fortify the outer LPs early to beat back early attacks (infantry) easily. You should be attacked by a Bloodthirster - their Relic unit - at an early point; deal with it by dancing a melee unit (e.g., Assault Marine Squad) around it while everyone and their dog shoots at it. Both commanders should be hacking at it as well. 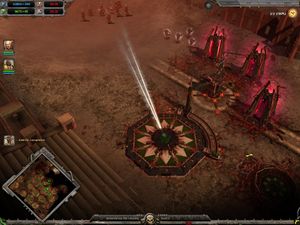 This missile squad destroyed most of two bases.

When you have control of your side, don't stop. If you started early, you can hit the other side with a very modest force for a lot of damage. Nothing but a missile squad (for buildings), a Land Speeder (for infantry) and an infiltrated Scout Marine Squad (for extended range) can destroy the next row of turrets/LPs, and frankly you should have better stuff (i.e., lascannon tanks) coming already. Go over before they have anything good by the river and set up your defense on their side. Lots of turrets around your LPs like the last mission. In this mission, having infiltrated Scout Marines extend your sight range seems to work well - the AI seems to have some problems, so that when your units start shooting at the enemy from outside their attack range, they tend to turn back prematurely and mill back and forth uselessly.

Now you should be able to make an attack. You can choose any base - left, right or straight over the Relic to the back of the "pyramid". The left base seems easiest, and taking it allows you to go around and raid the center base from behind. (Note that you can advance a bit to take away their Relic and then withdraw to start your actual attack/expansion on the left.) You'll probably need to use most of your forces for defense against the infantry, tanks, demons they send (on Insane, they can send several Bloodthirsters at the same time!) but if the enemy is using his resources elsewhere, once again a very modest force can cause havoc. Actually a single missile squad can potentially destroy a whole Chaos base here. Having your commanders order double Orbital Bombardment on a base will speed things up.

When you start your attacks, you naturally want to destroy production buildings, but also try to cripple their economy. Take (or at least decapture) all the points you can reach. When their resource flow drops far enough, they will fall to pushing out low-level units like Cultists, which means your tanks can do whatever they please. When you get the first base out, it's only a matter of time from there.

You win when you have destroyed all enemies. This may mean searching some corners etc. for a single unit or structure.