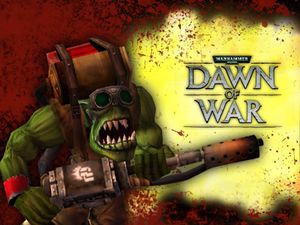 Orks – also known as Greenskins or Boyz – are a weird alien species of unknown origin. It is speculated they were created as bodyguards by some extinct race. They are somewhat larger than humans, very tough and very aggressive; if there's nobody else to fight, they will fight each other. The only things they care about are fighting and going fast. Orks thrive on conflict and tend to keep getting bigger the more they fight. The biggest Ork always leads the group; if another Ork gets even bigger, he'll kill the old leader and take over.

Biologically the Orks are a strange animal-fungal hybrid that reproduces by wind-borne spores (yes, seriously). This makes them extremely hard to eradicate, and grants them exceptional toughness and regenerative ability. They can heal after dismemberment or even decapitation if the missing part is just put back in soon enough.

Ork infantry has huge numbers and their units are mostly melee-oriented. Their technology is crude but functional, and combined with their crazy aggression it seems to hold up against the more advanced races. They have a habit of scavenging and modifying enemy vehicles, an example being the Looted Leman Russ Tank.

The Warboss is the primary Ork commander. His attacks (against anything) really hurt, he can take tons of damage, and he can improve the performance of nearby infantry. When you have to fight him (in mission four), you don't have any of your top-tier units, so you'll just have to concentrate all fire on him. It may still take a while and you could take a casualty or two.

This is the secondary Ork commander unit. Not as tough as the Warboss, but has more special abilities and can repair vehicles. You don't need to analyze him too closely, though - just kill him with some concentrated fire.

Gretchins are the Ork builders. The have minimal fighting ability and aren't really a threat to take seriously, but in the early missions some will attack you anyway. They build really fast, however, and if you're destroying a camp with a small force it may seem like they repair the buildings faster than you can damage them, or build new ones instead. Gretchins can infiltrate (and build/repair while infiltrated). 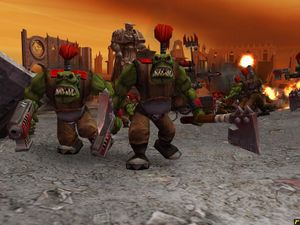 Slugga Boyz are the Orks' basic infantry unit. Like the name implies, they will slug you. They are cheap and numerous (up to 15 per squad) and can be upgraded with flamers. Try not to get tied up with them, shoot them instead. Any heavy weapons will do, but heavy bolters would be best as Slugga Boyz have light armor and you can stay far away.

Shoota Boyz are a bit more advanced, being equipped with shootas and upgradeable with big shootas. If they have regular shootas, you can just shoot them, they are no match for Space Marine heavy weapons. If there are many big shootas, though, you may want to melee them (esp. with Assault Marines) to avoid casualties.

Stormboyz are the Ork equivalent of Assault Marines. They will jump on your ranged infantry (or artillery, which isn't a problem as they have poor damage against vehicles and no melta bombs), so you may have to dance a bit. Having a flamer squad waiting by when they land will make short work of them, however.

TankBustaz are the Ork equivalent of a missile-equipped Tactical Squad. Get rid of them if you want to keep your vehicles. These guys can infiltrate, which is potentially dangerous, but fortunately they don't seem to utilize that skill much in campaign play.

Nobz - nobles - are the biggest and most aggressive Orks, a sort of a ruling caste. They are elite melee infantry, effective against other infantry out of the box and against everyhing when equipped with power claws. They would be roughly comparable to Assault Terminators - not quite as tough, but more numerous. Try to avoid close combat, dance and shoot them instead.

The Mad Dok is the Ork equivalent of your Apothecary, only with better fighting capacity. He has a Fightin' Juice special ability that works like your Word of the Emperor, preventing affected Orks from dying. Try to pick him out with plasma guns or the like.

This is a basic transport, probably originally looted from the Imperium. It's faster than a Rhino and armed against infantry. Wartrukks are easily fried with any anti-vehicle weapons, but if you don't have any, keep your infantry away or you'll take casualties. 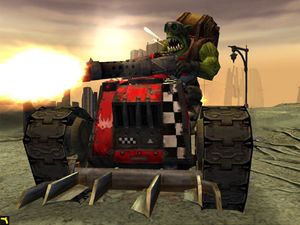 The Wartrak is hard to classify - it's like a more annoying equivalent of your Land Speeder. It's fast and both its weapons (rokkit launcha for anti-vehicle and bomb chukka for anti-infantry) disrupt your troops. If you have some anti-vehicle capacity then these are more of a nuiscance than a real danger, as long as you don't leave a vehicle or building in a position to be rokkited by a group of these.

Killa Kans are the Ork version of Dreadnoughts. They can be equipped with ranged weaponry, but just be thankful if they are - Kans are wicked in close combat. Keep your units (including vehicles) away and target any Kans early with concentrated missile/lascannon fire. 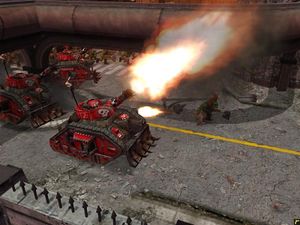 This is a pimped Leman Russ stolen from the Imperial Guard. There's no real difference to the Guard version; both have the battle cannon and several heavy bolters. These can take a lot of punishment and be a real nuisance if there's many. Try to take them one at a time, as in a 1:1 shootout they will lose to a simple missile squad (due to their inaccuracy and you staying out of bolter range).

The Squiggoth is the Ork Relic unit. It's really a big animal but it counts as a vehicle and can even be repaired. It has very strong melee and ranged attacks and can transport infantry. Even if you dance it, the huge zzzap gun will extract casualties. Either lead it around or surround it with Dreadnoughts while you concentrate all fire on it. You only need to take one in the campaign so these are not a major problem.

All Ork buildings (except for Generators) act as turrets. The most dangerous ones are Waaagh! Banners and Da Listening Posts, which can be upgraded with heavy weapons. Orks need a certain amount of Waaagh! Banners to build anything but basic units and structures; the banners also raise their unit caps.