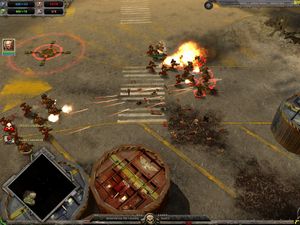 This will get you far.

You start with a cutscene of some Imperial Guard getting killed by Orks. Then the Blood Ravens arrive to save the day - the Force Commander and some Tactical Marines drop-pod in and get rid of the Orks, letting you start the game. The mission is a tutorial-ish one, with Angelos explaining what to do and why. You are quite limited in your building options (and order). You are given several secondary objectives, but in essence all you are doing is killing all Orks. 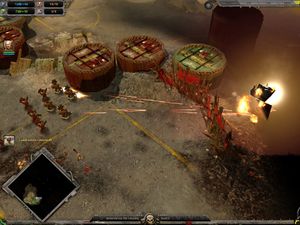 Not much they can do about those heavy bolters.

Start by building a basic base; one Plasma Generator is enough. Then capture the nearest Strategic Points, build Listening Posts on them and you are ready to start destroying Ork bases. There are also some Imperial Guard troops locked in combat with Orks here and there; you can help them out (no reason not to) but you don't really get anything for it as you can't control the Guardsmen. An exception is a Leman Russ on the (eastern) path to the main Ork camp that you really do get for yourself. 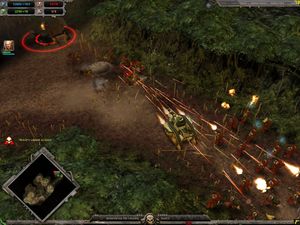 Not much they can do about this, either.

With your base done, build two more Space Marine Squads, reinforce them and upgrade them with the maximum number of heavy weapons. I suggest 1 squad with all flamers and 3 squads with all heavy bolters. When you see Orks, close in with your Force Commander (keep him solo) and flamer squad and set up the heavy bolter squads nearby to put some holes in the Orks. When you attack the camps, start by using the heavy bolters from maximum distance (they can outdistance Waaagh! Banners).

When you reach the paths to the main Ork base, take the Strategic Point at the western one and leave a heavy bolter squad there - an occasional Ork squad will try to come through. Take the rest of your men east to save the Leman Russ (and some Guardsmen a bit south). Repair the Leman tank and use it to advance, following with Marines. The Orks don't have any anti-tank weapons so the base is fairly helpless (not that you couldn't take it with your infantry alone).

With the base gone, you should win the mission and proceed to the next one. If you didn't, check your objectives screen to see if you missed something.