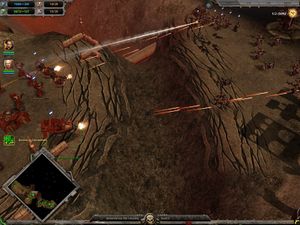 Clearing the other side of the chasm.

This map is also divided into two parts, this time by a chasm. You must storm the chapel (marked by an objective marker up north). There is a secondary Marine base on the other side that you should secure first. The Chaos base is north and west, behind the chapel; though you're probably not supposed to attack it. 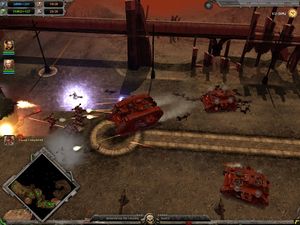 Tanks make clearing the east side a joke.

First of all, don't sweat about the eastern base under siege. The siege is pretty lame and you can take control of the base anytime you want with only one Assault Marine Squad. Move them to the Relic site and double-jump to the base, ignoring any enemies never mind how many. Now, to control the side you start at. 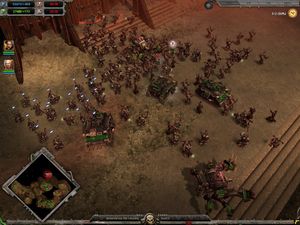 To get all the Strategic Points on your side, you need something that can take out single squads of Cultists and Chaos Marines. To defend the chasm, you need a counter for 2-3 simultaneous Raptor Squads. The attacks will usually come over the east (Relic) chasm. You may not be able to save the Blood Ravens holding the chasms - there's no way to reinforce or replace them so they'll be gone eventually. Turrets are good since the Raptors are worthless against them, and a single Tactical Squad with two heavy bolters and two missile launchers can easily clear the far side. 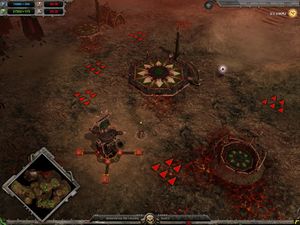 ...and their unguarded base about to get some visitors.

When you feel secure enough (or feel the eastern base threatened enough), jump a squad across to take the base. Your commanders will be transported there automatically. Flesh out the base and make either four Predators and four Dreadnoughts or one Land Raider with three Preds and Dreads. Clear out the other side with the tanks - shouldn't be too hard, since you could do it with a couple of squads if necessary. All their stuff is piled in front of the chapel, so the rest is very lightly defended. Take the other Relic and the last SPs at that distance from the chapel; build turrets around them. Then decide how to finish.

You can do as they say and attack the front, kill the army and kick down the door, then fight through the chapel (they will start sending reinforcements from the base). Or if you prefer another kind of a fight, Deep Strike their base instead (the horde at the door will rush there). Or make a feint one way, then accomplish the other. Either way, you must go through the front door in the end - you also can't finish the mission by jumping or sneaking inside to get the key.

However you decide to do it, you'll have a sizable fight. You should know how to win by now - lascannon/missile their vehicles, remember special abilities (Orbital Bombardment!), melee the ranged infantry, drop Dreadnoughts and so on. If you go for the base, be prepared for a long fight and some casualties. Deep Strike durable units, then attack with your tanks and stuff from the other side. You win the mission when you go through the chapel like you're supposed to.