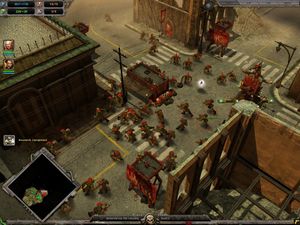 Lots of these coming your way.

Your objective is, not surprisingly, to destroy the Ork base. The resistance gets a bit heavier, though. 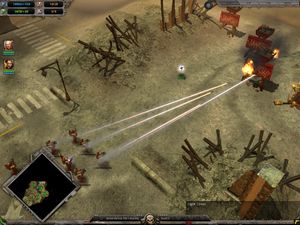 All you need for the small camps.

Go check your two defense outposts and capture both SP's your men are standing around. Finish the turrets you got, build 1-3 around the other SP as well. For each outpost, you want a heavy bolter squad, a missile squad, one of your commanders, the Imperial Guard squads you started with (upgraded with grenade launchers), and the turrets (1-2 upgraded with missile launchers). Get an Armoury etc. accordingly and set this up. The Orks will make annoying attacks with Slugga/Shoota Boyz and Wartraks, but said defense will be sufficient. Keep the Guardsmen back, they're not made for absorbing damage. 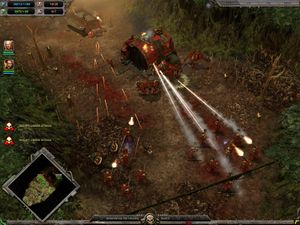 This will take care of the main base.

When your defense is set, you have some options. The Orks have Da Boyz Huts on the left and right, and a Da Mek Shop in the center. If you go right, you can salvage a Machine Cult and get Dreadnoughts, but you don't need it right away. I would go for the Da Mek Shop first to cut down the amount of Wartrak annoyance (some will still come from the main base, though). To achieve this, take 1 missile squad and 1-2 anti-infantry squads. Scout with infiltrated Skull Probes and missile the buildings from afar. Repeat on your left and right. Bear in mind that on Insane difficulty the Orks will defend this area with large numbers of Looted Tanks who will disrupt your infantry with their mass artillery fire. You'll need lots of Dreadnoughts to take the Ork armour out. To raise your Vehicle Cap high enough, construct additional Machine Cult buildings anywhere that there is space by your main base and nearby listening posts.

Next there's the three big holes in the city wall with Orks coming through. Get all SP's, build fortified LP's, move some infantry over and build a couple of turrets around each LP if you want to. Then go through to destroy their main base. There are Da Mek Shops at both corners; the eastern one is weaker (their Settlement being at the west corner) so you may as well start there. Send an infiltrated Skull Probe to check out the whole camp in advance.

Build 3 Dreadnoughts (no ranged weapons) set to an attack stance (F1, F3 or F5) and follow them with 1 missile squad and 1-2 anti-infantry squads. Let the Dreadnoughts loose and support with Marines (missile squad kills any Wartraks first and buildings second). Take the east corner first and then move west - ignore the center, it only has Waaagh! Banners you don't need to destroy. When the Orks are trying to do something about your attack, you can move in a couple of squads from the other direction and start destroying their buildings from behind. On Insane difficulty, the Orks will continue to churn out Looted Tanks as fast as they can, so keep pressuring them with Dreadnoughts. Prioritize the Mek Shops for destruction to stop the flow of tanks.

When the main structures are down, you win the mission. Remaining Waaagh! Banners don't count, ignore them unless they're shooting your troops.

[Go to top]← Infiltration | Under Siege | Destroy the Xenos →