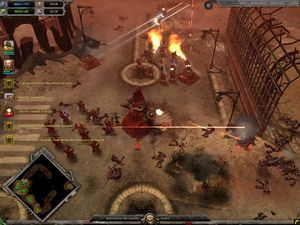 Defending one of your original SPs. This could use more turrets.

This is another mission where you may have to weather some uncomfortable attacks. Your objective is to capture and hold all four Relics for a short time; destroying Chaos bases/troops is not required, but trying to get the Relics without at least crippling their production is probably a bad idea. The enemy has two bases (behind the north Relic and south Relic from where you stand) and they will send attacks from both bases by various routes. 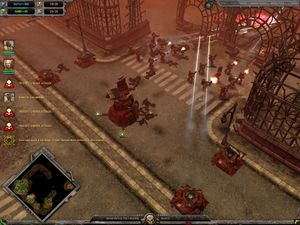 Defending a southern SP. Could still use more turrets to free one of the squads.

You start at the west corner; you are given some Imperial Guardsmen and damaged Leman Russ tanks (these are automatically – and slowly – repaired and handed to you one at a time) in addition to the standard couple of Marine squads. Take the first four Strategic Points right away but think before expanding more – you have to spread your forces pretty thin if you do. Build several turrets around your outer Listening Posts and have a Tactical Squad in front, Guardsmen at the back. The attacks will be infantry-based for a while, but think ahead for eventual vehicles (missile turrets and a missile squad). 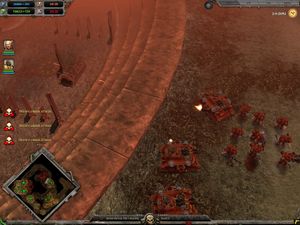 (At some point Commander Angelos will be dropped up northeast with some Scout Marines, a Terminator Squad and a Servitor. The assumption is that you would build a secondary base here, but you may want to consider abandoning the whole operation and moving Gabriel away (he respawns there) when the enemy is gone. Defending this outpost seems like a pain and requires stretching your forces/resources even thinner.) 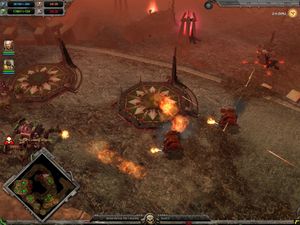 Attacking the north Chaos base from the secondary HQ built on their south base. Those Machine Pits would be a priority.

When you have a couple of squads to spare, start expanding. Southeast might be the easier direction; capture a point, fortify it with several turrets and a squad or two, move on. Chaos troops may attack any one (or two at a time) of your outposts, so if you want to keep them they should be well defended. The worst-case scenario seems to be 2–3 vehicles (Defilers and Chaos Predators) with missile-equipped infantry; this setup can seriously mess up your defense, which is probably turret-based in order to spare troops for expanding and attacking. If you can only spare one squad for a location, mixing two heavy bolters with two missile launchers may help as they are somewhat effective against both infantry and vehicles from long range. If the enemy brings anti-infantry units your squad should be behind the turrets, and vice versa for anti-vehicle attacks. Also try to have a Dreadnought ready for a defensive Deep Strike in case of emergency.

So now you should expand toward one of the Chaos bases to take it down. The southeast base seems easier so start there. Take 2–3 tanks and 1–2 squads in from the south; they should destroy it easily. Now a large part of the attacks from the north base will be directed here, so the "extra" firepower will come in handy. Bring a Servitor to make several turrets and start a secondary base here. Don't try to hold the elevated central part yet – if you want a Land Raider, you can destroy a Listening Post from below and capture the Relic by jumping an Assault Marine Squad there. Send something (say a vehicle and a squad) to take all the SPs east from here.

When your secondary base is stable, get your tanks, commanders and a couple of squads (also Dreadnoughts ready to Deep Strike) and take them up to the harder Chaos base. Most attacks seem to come via the east Relic toward your secondary base, so this is a good route to take – you can crush an attack on the way instead of it arriving at your lightly defended base. Also stop to take the east Relic and check if there are any structures (like barracks) at the central pit that you can shoot without going down. Move north and start taking down the base; you know the drill. Lascannon tanks to kill vehicles and buildings, drop Dreadnoughts next to Obliterators, use all your special abilities, repair your tanks. Try to get their vehicle and daemon production out as soon as possible.

If you can get that north base down, that's really it. You can make a quick sweep of the map with tanks, then capture the last Relics and wait for the mission to end.