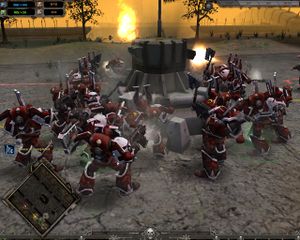 As with previous Dawn of War titles, Dark Crusade is focused on the conflict part of gameplay; in order to obtain more resources players must fight over them. Each player starts off with a base and wins by fulfilling mission objectives. There are multiple tiers of technology, with each allowing for more powerful units and upgrades. 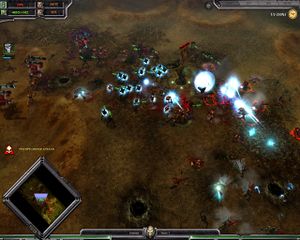 The Tau fighting the Necrons for a Control Point.

The number of units a player may field at one time is determined by population and vehicle 'squad caps'; these limit the number of infantry troops and vehicles a player may have on the battlefield. Squad caps may be increased using methods differing between races. Most units have a melee attack and a ranged attack. Units are often specialized to be better using one attack type. All units also have stances; these affect how the units respond to enemies. There are three types of units: commanders, infantry, and vehicles.

Commanders are hero units, and can usually only be built once. If they perish, they may be rebuilt. A sub-class is the semi-commander unit, which has many abilities like the commander unit but may be built multiple times. Infantry are foot soldiers, and may either be regular or heavy, with heavy infantry being much tougher than normal infantry. Vehicles are heavy weaponry and transports, and include tanks, artillery and troop carriers.

All units, aside from most heroes and vehicles, come in squads. These are groups of infantry that are commanded as a single entity. They may be reinforced with additional members, equipped with special weapons, or be attached to hero units. Some squads have special abilities, such as grenades, teleportation, and stealth, unlocked with research or leader units. Unit longevity is determined by their health and morale points, which govern a squad's fighting effectiveness. Both are reduced by weaponry; morale recharges independently or due to unit abilities, while health is increased by healer units or repair.

Players may either connect directly by IP connection, play on their LAN or play through an online service offered by Gamespy. There are eight game modes available for online skirmish play, such as Annihilate, which requires the player to destroy every enemy unit and building, or Sudden Death, which causes a player to be eliminated if another captures one of their strategic points. Multiple game modes may be enabled, calling for multiple winning conditions. Due to its nature as a standalone expansion pack, the player may only play as the Tau or Necrons in multiplayer. They may enter their original Dawn of War CD key to gain access to the original four races. Likewise, a Winter Assault CD key is needed to access the Imperial Guard.

The expansion features a "Risk-based strategic layer", a campaign including a "meta-map", similar to that in Westwood Studios's Dune games as opposed to the programmed, linear storylines of previous versions. Due to this lack of linearity, there is no plot aside from the opening cinematic; rather, as the player conquers various opposing factions the game provides a narrative specific to whom the player has conquered. If the player wins the campaign, a cinematic is played that depends on which faction the player was controlling.

The player may pick a faction to play as, and then engages in turn-based combat with the other A.I.-controlled factions. There are multiple provinces, which are conquered by fighting a regular skirmish match over them. These may either give a special bonus or supply special 'honour guard' units, which are powerful, non-trainable versions of regular units. They may only be made on the main battlefield overview screen, and, like provincial reinforcements, cost planetary requisition, a resource gained on a per-turn basis based on how many provinces the player controls. Honour guard units transfer over provinces and may be used repeatedly. There are also seven 'Stronghold' provinces that function as bases for respective factions; these are made like more traditional campaign games, with multiple secondary and primary objectives that vary from faction to faction. 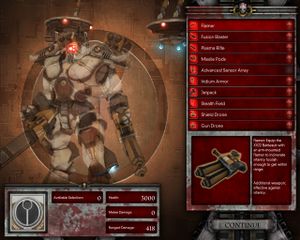 The Tau commander, equipped with a majority of wargear upgrades.

Also, a race's commander unit may be upgraded with special "wargear", unique, customizable upgrades that vary by race. These are awarded at battle milestones, ranging from a certain amount of kills to conquering many provinces.

Campaign scenarios are persistent, meaning that all player structures are 'saved' when a game is won. For example, if a player builds a base and conquers a province, only to have a neighbouring faction attack aforementioned province, the player will start out with his previous base, with the exception of having no technology researched. Players may also choose to garrison provinces with units that are instantly available should the province be attacked. These are bought with planetary requisition.

All five of the pre-existing factions gain new units, and two new playable races are available.

One of the two newer races, the Tau are unique in multiple ways. Tau warriors and vehicles are powerful in ranged battles, but lack melee capability; even their commander lacks a melee attack. To compensate, they fight alongside the alien Kroot, using these primal warriors as auxiliaries. Also, they are the only race with a 'choice' in their final technology choices; two final tier buildings are presented, which provide different end-game units and technologies. Only one may be chosen. The Tau also do not have any standalone defensive structures or minefields.

The Necrons are unique, as they do not require requisition to build their army. All units are in and of themselves free of requisition point cost. Power is the only resource Necrons need, in order to perform research, construct buildings and to construct and reinforce squads. However, capturing Strategic Points and building Obelisks (the Necrons' listening post) on them will increase the speed of research and building, and will also expand the population cap. The Necron Monolith, their home base, is restored as more buildings are built, while also unlocking new units (similar to the Zerg in Starcraft), and functions as the only vehicle- and troop-producing building. When fully restored it becomes mobile (albeit very slow, though it can teleport) and is armed with powerful weaponry. Many Necron units have the ability to resurrect, and most will leave persistent corpses on the battlefield that may either self-resurrect after they die or be restored by specialized Necron units (this resurrection can actually allow the Necrons to go over their population cap).

Necrons were previously seen in Winter Assault at the end of the single-player campaign, but noticeably stronger.

Dark Crusade features some reappearances by characters in past games, such as Farseer Taldeer and Warboss Gorgutz 'Ead 'Unter, who were featured in Winter Assault.

The events of Dark Crusade take place on the planet of Kronus, a world on the eastern fringe of the Imperium, where the local human population un-easily co-exists with the nearby Tau Empire. It is also an ancient Necron tomb world, whose inhabitants are starting to awaken. Eldar from Craftworld Ulthwé soon arrive to stop the Necron threat from growing. In addition, Kronus happens to be a world with hidden relics, left behind from the Horus Heresy, that are significant to the Blood Ravens, the Imperial Guard and the Word Bearers Legion. There is also a local Ork population in the southern jungles who quickly mobilizes against the new threats. Faced with such opposition against the thriving colony, The Tau Ethereal Aun'el, knowing the world must be kept, orders the Fire Warriors into battle against the other factions.